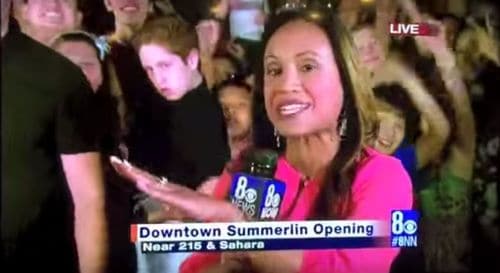 At a recent mall opening in Las Vegas, all eyes were most definitely not on news anchor Patranya Bhoolsuwan. One boy (above left, in black), staring down the camera with a confident gaze, stole the spotlight and achieved diva status with his killer dance moves. With everyone else wildly waving their arms and screaming at the camera, this kid opted to set himself apart, giving us some “Single Ladies” hip-bobbing and hints of “Paris is Burning” vogue realness (along with a hilarious stank face full of disdain for his fellow mall-goers).

Gawker reported that the news anchor herself had to bow down and admit defeat. She sent out a tweet about the video and a follow up pose with the diva-in-training:

Apparently this kid was trying to steal my spotlight…and he succeeded. #Fierce #DowntownSummerlin #8NN http://t.co/DbCbJM9Dar.

Check out two videos, one solo and one dueling for the spotlight, AFTER THE JUMP…