Estonia lawmakers have voted 40-38 to approve a partnership act that recognizes the civil unions of same-sex couples, the Associated Press reports: 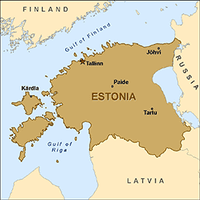 The new law will gives those in civil unions — heterosexual or gay — almost the same rights as married couples, including financial, social and health benefits provided by the government and legal protection for children. It does not give adoption rights for couples in such unions but does allow one partner to adopt the biological child of the other.

It comes into force in January 2016, after it has been signed by President Toomas Hendrik Ilves who supported the bill.

The Estonian Human Rights Center hailed the vote as "historic," saying it would send a strong message to neighboring Russia, which passed what it called "a draconian anti-gay law" last year.

"Estonia (has) made a leap toward a society that is freer, more equal and values human rights for all," the group's director, Kari Kasper, said.