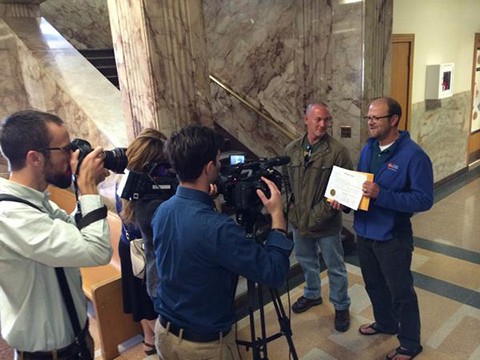 With the news from Wyoming’s Governor and Attorney General that the state will not appeal a district judge’s ruling that struck down the state’s ban on same-sex marriage, same-sex couples are officially able to marry in the now aptly named Equality State. Here are the first photos trickling in on Twitter of marriage equality arriving at long last in Wyoming.

AJ & Jennifer are waiting to apply for a marriage license in Laramie County. Today is Day #1 of marriage in #WY! pic.twitter.com/dswWo3kYuD

Not a single protestor for either marriage outside of the courthouse. #wyoming #equality #marriage pic.twitter.com/EJirjv4dkq

Just married, A.J.and Jennifer watch as Stacey Maloney and Tina Johnson get married after picking up their license. pic.twitter.com/vejwqpd8xt