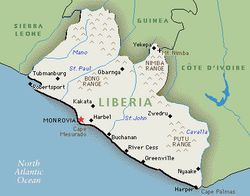 Gays throughout Liberia are being targeted and harassed as a result of churches within the country claiming that recent ebola outbreaks are acts of God’s wrath condemning homosexuality.

"Since church ministers declared Ebola was a plague sent by God to punish sodomy in Liberia, the violence toward gays has escalated,” LGBTQ organizer Leroy Ponpon told Reuters. “They're even asking for the death penalty. We're living in fear.”

Factors like a failing healthcare infrastructure and spotty governmental response have contributed to Liberia bearing the brunt of the outbreak. Earlier this week the World Health Organization released its most recent figures tracking the number of confirmed cases and mortalities associated with ebola throughout West Africa. Liberian health officials have recorded 508 deaths caused by the virus–the largest figure in the region.

Since the outbreak’s beginnings in late 2013, tensions within Liberia have slowly simmered to a boil, coming to a head more recently as the death toll continues to rise. As the situation becomes more dire, conservative religious leaders and members of the local media are capitalizing on the public’s unaddressed fears.

Ponpon recounted having his address and phone number publicized on television after authorities learned he was gay. The unwanted attention, he says, has forced him and other gay people to travel at night, for fear of being seen.

"Amnesty has received pictures of cars that reportedly belong to gays with their windows smashed as well as reports that gays have been forced from their homes and had to go into hiding," explained Francois Patuel, an Amnesty International representative based in West Africa.