An art piece in Grand Rapids, Michigan that aims to raise awareness about how damaging homophobic rhetoric can be was vandalized last week 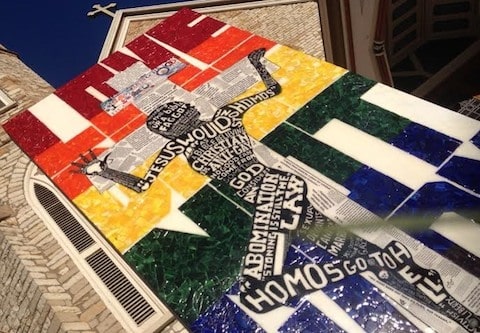 An art piece in Grand Rapids, Michigan that aims to raise awareness about how damaging homophobic rhetoric can be was vandalized last week, reports WOODTV.com.

The conceptual piece by Timothy Gabriel, which has since been restored, was damaged earlier this week when a passerby splattered some form of red paint or ink across the surface of the 8-foot-tall, 4-foot-wide installation.

The organizers of the event say that the work “depicts an androgynous silhouette, symbolizing the LGBT community, smeared with spiteful words on a cross of hateful quotes…The primary purpose of this piece is to raise awareness of the impact homophobic rhetoric has on the LGBT communities in Uganda, Russia, and around the globe. In many parts of the world, these minorities are oppressed, maimed, stoned, tortured, imprisoned for life, and executed. ‘Love Does Not Harm’ seeks to draw attention to the specific role many American Evangelicals play in this very real persecution.”

Explaining that he had allowed for a space on the back of the piece for feedback from locals, Gabriel said although most of the response has been positive, “it’s a shame that someone had to tarnish the front of it the way that they did.

"We were able to scrub most of it off the yellow section. But any attempt to move anything off the white left a stain or a residue. But it hasn't obstructed or destroyed it."