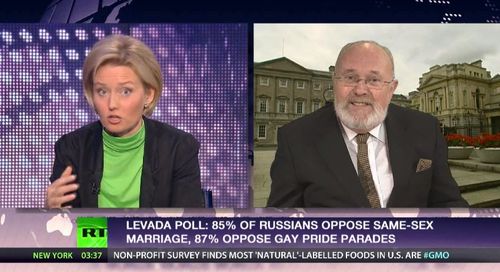 Explaining that Russia's attitudes towards gay rights are "30 years behind" Western sensibilities, Norris wasted no time in bringing up the "dishonest" campaign that the Russian Orthodox Church and lawmakers have led in trying to "protect children" with the country's anti-gay 'propaganda' ban.

When host Oksana Boyko explained that perhaps Russia's anti-gay efforts were related more to protecting its cultural "heteronormativity" rather than criminalizing homosexuality or perpetuating discrimination, Norris fired back: 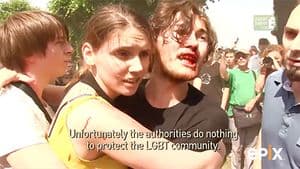 "What about parades, marches banned by the mayor of Moscow? Why was that? What about the people being beaten up, being dragged out of their homes, being tortured, being subject to vicious, brutal attacks by thugs in Moscow with the police standing by. That's hardly equality…what we should be doing is making sure that our family structures are more rational and they reflect the views of everyone in society and that we protect everyone in society. We don't just do lip service for the individual's rights and say "Oh you can be homosexual in a hole in the ground somewhere as long as nobody knows about it, but we're perfectly alright with you being clobbered and battered to death on the streets of Moscow with the police turning the other way'"

It's a 30 minutes segment, but well worth a full watch – especially towards the end when Boyko gets all flustered after being asked about Vladimir Putin's own sexuality in light of his fondness for "galloping around with little small beady eyes, half-naked on a horse."

Related: "Documentary To Russia With Love Looks at LGBT Rights in Russia in the Lead Up to Sochi Olympics: VIDEO"