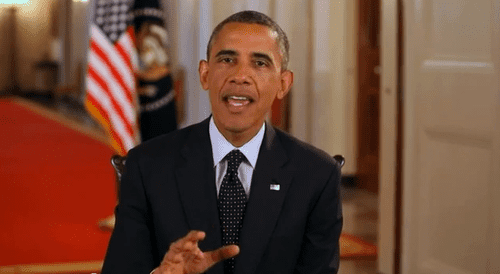 In an interview published today over at The New Yorker, President Obama weighed in on the issues that have come to define his judicial legacy (health care, voting rights, gay marriage) as well as his belief the Constitution requires all states to permit same-sex marriage.

"Ultimately, I think the Equal Protection Clause does guarantee same-sex marriage in all fifty states,” he said. “But, as you know, courts have always been strategic. There have been times where the stars were aligned and the Court, like a thunderbolt, issues a ruling like Brown v. Board of Education, but that’s pretty rare. And, given the direction of society, for the Court to have allowed the process to play out the way it has may make the shift less controversial and more lasting."

Obama was also asked to name the best Supreme Court decision of his tenure and he answered with the high court's decision earlier this month to not take up gay marriage cases from 5 states:

“In some ways, the decision that was just handed down to not do anything about what states are doing on same-sex marriage may end up being as consequential—from my perspective, a positive sense—as anything that’s been done,” the President said. “Because I think it really signals that although the Court was not quite ready—it didn’t have sufficient votes to follow Loving v. Virginia and go ahead and indicate an equal-protection right across the board—it was a consequential and powerful signal of the changes that have taken place in society and that the law is having to catch up.”

Head over to The New Yorker HERE to read the full interview, in which Obama also discusses his efforts to diversify judicial appointments in regards to nominees' race, ethnicity, and sexual orientation.