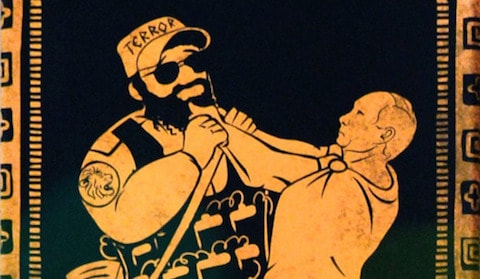 No, that's not an Onion headline. To celebrate the Russian President's birthday, members of a Pro-Putin Facebook group set up an exhibit in Moscow's "Red October" showspace entitled "The 12 Labors of Putin", directly comparing the President to the ancient Greek demigod. The works and their metaphorical associations are laughably earnest. Putin's "12 labors" are:

The tribute is so inappropriate on so many levels, not the least of which being that thanks to his multitude of shirtless photos it's evident that Putin lacks the pectoral girth to be compared to the strongest man of Greek legend. More to the point, the Labors of Hercules were an act of penance after Herc went temporarily mad and murdered his wife and six children; Putin is more accustomed to being on the receiving end of apologies. Plus, there's that whole thing where Herc's nephew Iolaus was his gay lover, though one imagines that inconvenient detail gets swept under the rug like Tchaikovsky.