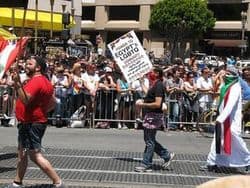 Last month eight gay Egyptian men were arrested and “tested for homosexuality” after appearing in a video in showing a gay marriage. Though homosexuality is not explicitly illegal within the country, authorities cited “inciting debauchery” as their reasoning behind bringing the men to trial.

Queer-rights supporters have rallied in response to the men’s arrests, organizing coordinated both physical and online protests on various social networking platforms around the hastags  #StandForEgyptLGBT and #SolidarityWithEgyptLGBT.

"We invite you to participate in the demonstration that will take place on 18 October 2014 in front of every Egyptian embassy around the world [if accessible] to protest against human rights violations committed by the Egyptian government,” Solidarity With Egypt organizers wrote in an online statement. “relying on unlawful and unethical media tools, towards those of differing sexual orientations and gender identities."

#StopBlueCoat, a third hashtag protesters are rallying behind is a direct reference to Blue Coat Systems, an American security firm based in California that is responsible for providing Egypt with much of its surveillance technology. Blue Coat recently began the process of distancing itself from its Egyptian business connections facing backlash following a Buzzfeed article.