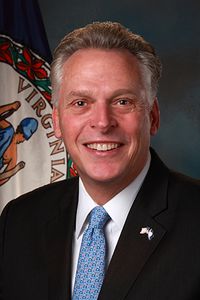 Terry McAuliffe (D), Virginia’s recently elected governor, threw his support behind instituting protections for LGBT people in the workplace by issuing an executive order requiring all state agencies disregard the state’s former ban on same sex marriage. In a 2-1 split, a federal appeals court officially declared the ban to be unconstitutional in July of this year.

"The choice of whether and whom to marry is an intensely personal decision that alters the course of an individual's life," the opinion reads. "Denying same-sex couples this choice prohibits them from participating fully in our society, which is precisely the type of segregation that the Fourteenth Amendment cannot countenance."

McAuliffe’s order will ensure that all gay and lesbian state employees whose marriages are now recognized within Virginia will be able to provide their spouses with access to state health programs. The announcement  comes on the heels of the Supreme Court’s decision not to hear petitions from five states regarding same sex marriage. Within hours the decision triggered an immediate spike in the number of wedding licenses issued to gay couples throughout Virginia.

“After decades of work to change hearts and minds, the freedom to marry is now a reality,” executive director of Equality Virginia James Parrish told The Washington Blade. “This is such an exciting and historic day, and we are thrilled for the thousands of couples whose relationships — and families — will now be recognized by the commonwealth of Virginia.”