The ACLU has announced its plans to appeal today's anti-equality Sixth Circuit ruling to the Supreme Court. 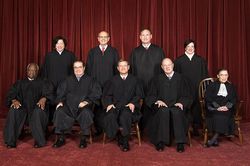 "This decision is an outlier that's incompatible with the 50 other rulings that uphold fairness for all families, as well as with the Supreme Court's decision to let marriage equality rulings stand in Indiana, Wisconsin, Utah, Oklahoma, and Virginia. It is shameful and wrong that John Arthur's death certificate may have to be revised to list him as single and erase his husband's name as his surviving spouse. We believe it's wholly unconstitutional to deny same sex couples and their families access to the rights and respect that all other families receive. We will be filing for Supreme Court review right away and hope that through this deeply disappointing ruling we will be able to bring a uniform rule of equality to the entire country."