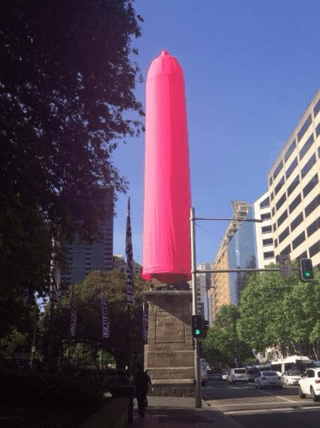 There are certain cities throughout the world that feature monuments whose construction lend themselves to…a particular kind of tourist photo. Paris, Pisa, and Washington are all homes to magnificent feats of human ingenuity whose shape tend to be co-opted for a giggle or two, and now Sydney, Australia can count itself amongst their ranks.

Last week the 157 year old obelisk located in Sydney’s Hyde Park found itself enveloped in what the AIDS Council of New South Wales (ACON) is calling  Australia’s largest condom as a part of their HIV/AIDS transmission campaign.

“ The need for gay men to ‘stay safe’ by using condoms is at the core of NSW’s strategy for eliminating HIV transmission by the end of the decade,” explained ACON’s CEO Nicolas Parkhill.

“We won’t be able to achieve this goal unless gay men use condoms when they’re having high-risk sex with casual
partners, particularly in situations where a partner’s HIV status isn’t known – it’s that simple. This installation is sure to create lots of interest as we’ve selected a very visible icon in a high traffic area. We’re hoping to turn lots of heads as well as raise a few eyebrows, not only here on the street but also on social media where the reach of the campaign will be expanded throughout NSW and beyond.”

According to Pink News the condom will remain in place for the next six days as a means of provoking conversation about safe sex policies.