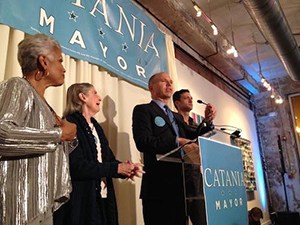 Bowser expressed strong support for LGBT issues throughout the campaign after defeating incumbent mayor and fellow Democrat Vincent Gray in the April primary. The race divided the local LGBT community, with some longtime LGBT advocates supporting Catania’s bid to make history and others sticking with the Democratic nominee Bowser. Still others backed former Council member Carol Schwartz, a longtime LGBT ally who ran as an independent.

In the end, it wasn’t close. Bowser won about 54 percent of the vote to Catania’s 35 percent and Schwartz’s 7 percent.. Catania gave up his Council seat to run for the job.