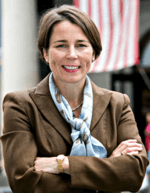 "Maura Healey is one of the staunchest advocates for equality we have in this country, and we join her in celebrating her historic victory tonight. As the nation's first openly gay attorney general, she is an inspirational trailblazer and will fight to guarantee civil rights and legal equality for all people of Massachusetts."