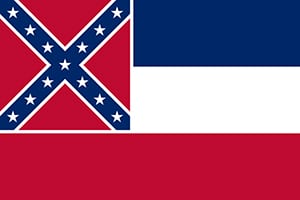 A federal judge has struck down Mississippi's ban on same-sex marriage, BuzzFeed reports. The decision comes just hours after Federal Judge Kristine Baker struck down a similar ban in Arkansas. Like Baker's decision, the ruling in Mississippi is temporarily stayed. The judge in Mississippi has provided fourteen days for the Fifth Circuit Court of Appeals and the United States Supreme Court to weigh in before same-sex couples will be allowed to wed. From the ruling:

“Today’s decision may cause uneasiness and concern about the change it will bring,” U.S. District Court Judge Carlton Reeves wrote. “Mississippi continues to change in ways its people could not anticipate even 10 years ago. Allowing same-sex couples to marry, however, presents no harm to anyone. At the very least, it has the potential to support families and provide stability for children.”

Judge Carlton also noted the large swath of courts that have ruled in favor of same-sex marriage and equality, stating, “This court joins the vast majority of federal courts to conclude that same-sex couples and the children they raise are equal before the law.”

Uber-counsel Roberta Kaplan, who argued against DOMA in United States v. Marriage, argued for the plaintiffs against the marriage ban. Said Kaplan of the decision,

“Soon, families throughout this country will be gathering together to celebrate Thanksgiving. Our clients and thousands of other gay people throughout the State of Mississippi can now enjoy their turkey and pecan pie with their families thankful that a court has recognized that their government must treat them the same as everyone else. This is a big day since it means that gay Mississippians will have the right to be married in their own home state that they love so much. It is also a big day for our country and for our Constitution, since it means that Americans in yet another state can now appreciate that gay people, who are their neighbors, friends and family members, have the right to equal protection of the laws."

READ the full decision below: