President Obama will name Loretta Lynch, a federal prosecutor in Brooklyn, to succeed Eric Holder as the U.S. Attorney General, the NYT reports: 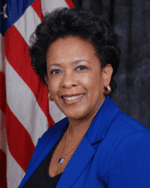 If confirmed she would be the first African-American woman to serve as the nation’s top law enforcement official. She would also be a rare instance of Mr. Obama reaching outside his inner circle to fill a crucial post.

…Ms. Lynch first gained prominence for her work prosecuting members of the New York City Police Department for the 1997 beating and sexual assault of a Haitian immigrant with a broom handle. The case became a national symbol of police brutality.

A possible complication to her confirmation—besides the fact that she would be the first African-American woman to hold the nation's top law enforcement position which would make for many exploding heads on the right—is that she has "led the prosecution of Rep. Michael Grimm, a Republican congressman from Staten Island, for alleged tax fraud." Grimm won re-election Tuesday, joining the ranks of indicted members of Congress.

More on Lynch in a NYT profile HERE.

Previous Post: « Same-Sex Couples to Appeal Sixth Circuit Ruling Directly to U.S. Supreme Court
Next Post: ‘Applications’, The Tale of a Guy, a Phone, and a Dating App: Part 5 »