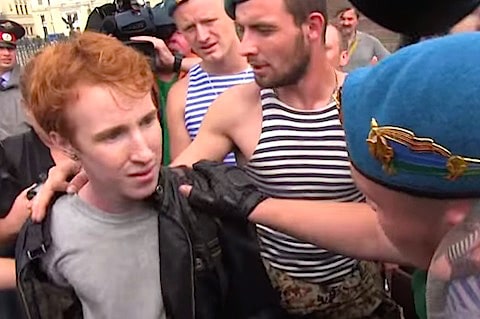 Cherkasov was defending Kirill Kalugin (pictured above), who contested his detention for a one-man demonstration during Russia's Paratroopers Day celebrations on August 2nd. Kalugin was later attacked by a group of paratroopers taking part in the annual holiday for Russian airborne troops.

Chekasov, a member of the Agora human rights group, said a group of men accosted him splashed him with an unidentified "corrosive, smelly liquid" that got on his hands, neck and clothes.

He later identified one of the assailants as Anatoly Artyukh, a conservative activist and aide to anti-gay St. Petersburg politician Vitaly Milonov. Milanov is currently drafting a bill to eradicate a loophole in Russia's same-sex marriage ban after lesbian couple Irina Shumilova and Alyona Fursova tied the knot earlier this month.

Although Milanov has denied Artyukh’s involvement, he said that "lawyers are scum and mercenaries who work for money" and suggested that Cherkasov and Kalugin should be exiled.

The court ruled that although police had acted legitimately by interrupting Kalugin’s demonstration, his continued detention at the police station was illegal.

Watch a disturbing video of the paratroopers attacking Kalugin, AFTER THE JUMP…