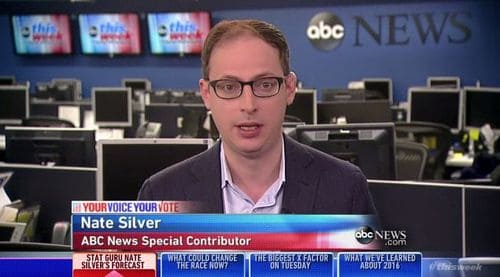 Writing over at FiveThirtyEight this weekend, statistician Nate Silver points to the growing odds that the Republican Party will win a Senate majority this midterm election.

On Friday, I posed the question of whether the polls would have to be systematically wrong for Democrats to hold the Senate.

Technically speaking, we’re not quite there yet. If Democrats win Georgia and Alaska and North Carolina, and Orman wins Kansas and caucuses with them, they’d hold the Senate even if Republicans flipped Iowa, Colorado and the five other Democratic-held seats where GOP candidates have an advantage in the polls. But that’s quite a parlay to pull off.

Here’s one way to think about it. The FiveThirtyEight model accounts for the possibility that the polls could be systematically biased — in either direction. If I instead tell the model to assume the polls have no overall bias — even though they might be off in particular states — the Democrats’ chances of keeping the Senate would be just 17 percent. Democrats are becoming increasingly dependent on the possibility that the polls will prove to be “skewed.”

Silver also appeared on This Week with George Stephanopoulos earlier this morning to discuss his Senate and gubernatorial predictions.