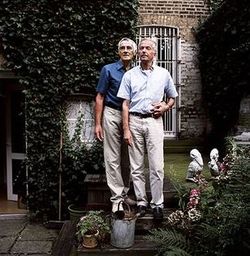 Much of the coverage focusing on elderly queer-identified people highlights the ways in which they are marginalized by mainstream, youth-oriented gay culture. According to an in-depth analysis from the Associated Press however, some of the most difficult challenges facing aging members of the LGBT community are socio-economic. The combined impacts of legacy discriminatory workplace policies, the early AIDS crisis, and slow progress towards marriage equality have created a difficult economic landscape for many gay, “boomer” aged people looking to retire.

According to the Federal Reserve’s Survey of Consumer Finances, same-sex couples save about 25% less for their retirement as compared to their straight counterparts. The analysis, conducted by the AP-NORC Center for Public Affairs Research found that the media amount that straight married couples was about $88,000 while same-sex partners only saved about $66,000. The cause? A lifetime of lower wages and chronic underemployment.

While many corporations have non-discrimination policies now, it is still legal to fire someone for their sexual orientation in 21 states, according to the American Civil Liberties Union.

Two polls, one by Pew Research in 2013 and one by Gallup in 2012, reached the same conclusion: LGBT individuals were more likely to make less money than their straight peers during their careers. Gay men earned as much as 32 percent less than straight men, according to research by the Williams Institute, a California-based think tank that focuses on LGBT issues.

As a result, gay men and women over 65 are more likely to end up in poverty. Lesbians, who face wage discrimination because of both their gender and sexual orientation, are even more vulnerable.

The economic harms inflicted upon elderly LGBT people are further compounded by a fundamental lack of attention being paid to them as a population. The Department of Health and Human Services, which monitors and surveys elderly minority populations, has yet to begin keeping track of queer people. The lack of hard data linked to the population means that funding for programs geared towards aging gays is difficult to secure.

"In the aging world, there has been little regard for even the existence of LGBT older people, let alone their particular social and financial needs," said executive director of Services and Advocacy for GLBT Elders Michael Adams.