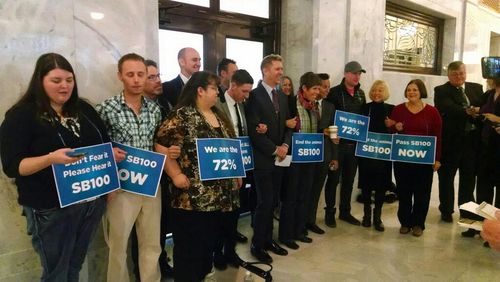 The Mormon church published a statement on its website Friday — under the category "Mormons 101" and the heading "Gays and the Church" — referencing its support for an LGBT-inclusive nondiscrimination ordinance in Salt Lake City five years ago. Here's the full statement:

“Church leaders recognize the existence and difficulty of same gender attraction and acknowledge the difference between having same-sex attraction and acting on it. They censure only the latter, and leaders strongly advocate for understanding, inclusion, and kindness toward people of all gender orientations. The Church website mormonsandgays.org details sincere outreach by the Church within the gay community, including support in Utah for nondiscrimination protections of employment and housing. There is room for compassion, common ground, and shared humanity among people who disagree, and Church leaders eagerly pursue these ideals, both inside and outside the Church.”

Friday's post has led some to declare that the Mormon church now supports a statewide law prohibiting discrimination against LGBT people in employment and housing. However, an alternative reading of the informational post might conclude that it merely contains a reference to the church's previous support for one nondiscrimination ordinance — in Salt Lake City.

Indeed, on the website mentioned in the statement, MormonsAndGays.com, I found a link to a statement from the church in which it makes clear that its support for the nondiscrimination ordinance in Salt Lake City was specific: 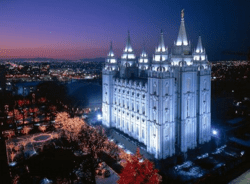 It is important to understand that the provisions and elements of each nondiscrimination ordinance can often vary significantly. The Church supported the Salt Lake City ordinance because it granted common-sense rights that should be available to everyone, while safeguarding the crucial rights of religious organizations. The ordinance also avoided the potentially problematic elements of public accommodations and criminal penalties.

Since Salt Lake City passed its nondiscrimination ordinance, numerous other Utah cities have followed suit. However, bills to ban anti-LGBT discrimination statewide have failed in every legislative session. Earlier this year, several protesters were arrested (above) outside the governor's office after they demanded a hearing on one of the bills.

It's worth noting that the city nondiscrimination ordinances in Utah, as well as the proposed state legislation, have contained broad exemptions for religious groups. It's also worth nothing that there's a major difference between the municipal ordinances — punishable by fines of up to $1,000, although none has ever been levied — and a statewide law, which would allow alleged victims of discrimination to file lawsuits. Utah.Politico.Hub summarized the difference as folllows:

Although discrimination is prohibited under the municipal ordinances, the remedies are extraordinarily limited, and the decision to take judicial action is left to the discretion of the  municipal attorney. Under SB100, the full remedies available under the Utah Anti-Discrimination Act and the Utah Fair Housing Act – including a private right of action and damages – would be available to persons asserting a sexual orientation or gender identity claim, making the application of the law to discriminating employers and landlords potentially significantly more severe.

Having spent a session covering the Utah Legislature, I'd say the bottom line is that until the church clearly states its support for a specific piece of legislation to ban anti-LGBT discrimination statewide — which it has never done, despite plenty of opportunities — it's doubtful that predominantly Mormon state lawmakers will have the political will to pass such a law.

UPDATE: The Mormon church has updated its statement to clarify that it was referring only to the Salt Lake City ordinance. To be clear, though, the church didn't "walk back" its statement, as some are reporting. It merely clarified it. Read it here.