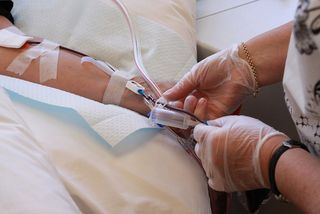 Today the Food and Drug Administration proposed amendments to its current restrictions on who can donate blood. The new changes would finally allow gay men to participate in blood drives provided that they had not engaged in sexual contact with other men for at least a year, however. The announcement comes just over a week after the FDA last said that it was through considering lifting its ban on gay blood donations.

It first seemed as if progress was being made after a U.S. Department of Health advisory panel composed of blood-donation experts and doctors voted 16-2 that gay men should be able to donate blood. The one-year of abstinence provision has long since been advocated for by the American Red Cross, America’s Blood Centers, and the American Association of Blood Banks (now known as the AABB.)

Though the Department of Health advisory panel’s vote was considered influential, the panel did not, ultimately, have the power to make a final decision. Following the FDA’s previous refusal to consider amending its rules, over 80 members of Congress moved to petition Health and Human Services Secretary Sylvia Mathews Burwell to reconsider.

The logic behind the gay blood ban is grounded in a decades-old fear of HIV. Because gay men who have sex with other men account for about 63% of all new HIV infections annually, they are often thought to pose a significant health risk to blood banks. That thinking, however, belies the manifold layers of protection built into the U.S.’s medical system–routine screening of donated blood samples is standard practice. Though some see the FDA’s latest claims as progress others, like the Guardian’s Zach Stafford, say the move is more insult than inspiration:

“But these are the crumbs that many of us are willing to accept – the crumbs that cement our second-class treatment, even after our big fight for marriage equality. Even by accepting a one-year abstinence waiver in lieu of a life-long ban, we are accepting prejudice against us over science that, in many ways, once freed us from fear.

Gay men have for too long gotten crumbs while others get a seat at the table – and a microphone at the FDA to preach their unscientific prejudice. It’s time to pull the plug.”

In a similar move David Stacy, the Human Rights Campaign's Government Affairs Director, issued a statement acknowledging both the FDA's progress and the discriminatory subtext coded into the one year abstinence provision:

"While this new policy is movement toward an optimal policy that reflects fundamental fairness and the best scientific research, it falls far short of an acceptable solution because it continues to stigmatize gay and bisexual men, preventing them from donating life-saving blood based solely on their sexual orientation, rather than a policy based on actual risk to the blood supply.

This new policy cannot be justified in light of current scientific research and updated blood screening technology. We will continue to work towards an eventual outcome that both minimizes risk to the blood supply and treats gay and bisexual men with the respect they deserve."