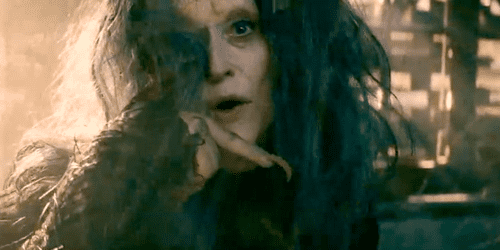 "Go to the wood!" is Streep's wish your command?

Once upon a time Stephen Sondheim wrote a musical classic INTO THE WOODS. The first act brings together classic fairy tale characters into one comic misadventure and the second act debunks the “happily ever after” myth and transforms the whole play into a masterpiece about virtually all the Big Stuff: growing up, parenting, marriage, death, rebuilding after great loss.

When it comes to lines we can repurpose to talk about the prospects of a film version, Little Red said it best:

It made me feel excited. well, excited and scared.

Isn’t that how devotees of the movie musical feel each time a new one arrives? A bit of background to justify the high-anxiety. The live-action movie musical died alongside Bob Fosse's alter ego in All That Jazz (1979). The genre was six feet under for two full decades despite intermittent attempts at excavating its exquisite corpse (Annie, Little Shop of Horrors, Newsies). The Disney animation renaissance of the 1990s renewed interest and the genre was successfully reborn at the turn of the century by the one-two-three-four punch of Dancer in the Dark, Hedwig and the Angry Inch, Moulin Rouge! and Chicago. That's a four consecutive high quality film run that this ancient-newborn genre has yet to match since. And why is that exactly? Some people blame the lack of strong directors who are skilled in the form, others the resistance to new blood (nearly all modern musicals are adaptations). Still more culprits are Hollywood’s frequent miscasting since musical skill is considered optional.

But The Witch (Meryl Streep) would like us to stop bitching and get on with this review.

No, of course what really matters is the blame
Somebody to blame.
Fine, if that's the thing you enjoy, Placing the blame,
If that's the aim, Give me the blame-

So back to Into the Woods . Does it survive the transfer? With so much baggage brought into the movie theater I’ll admit that a traditional review has been tough to write. So herewith a ranked list of the musical numbers (in their current form) as a sneaky way to coax out all those thorny blinding feelings. 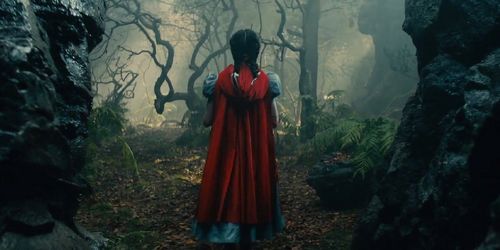 The list, from worst to best, is AFTER THE JUMP… 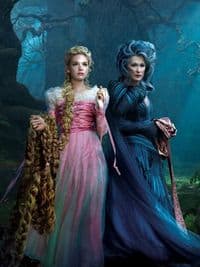 “Hello, Little Girl”
Johnny Depp is not so much the Demon Barber of the movie musical but the Devil Butcher. He can’t sing so he talks his way semi-rhythmically through Sondheim’s expressive melodies, gutting them of their beauty in the process. That they let this once essential now tiresomely repetitive star choose his costuming (an awful zoot-suit number that renders the Wolf less fantastical and more human pimp /pedophile) is the film’s most obvious eyesore and icky miscalculation.

“Witches Lament / Children Will Listen / Last Midnight”
[MINOR SPOILERS] Meryl Streep has been winning her customary raves for the showiest role and can probably expect an Oscar nomination in two weeks. It's true that she sings the part with passion and nuance. But the smoothed Disney-fied edges of the adaptation which make Act Two much less dark (Rapunzel doesn’t die for one) dull the Witch’s motivations and her character arc becomes nearly inexplicable as a result. “Last Midnight” remains exciting and flashy as a song but good luck figuring out what the hell is going on in that visual fx muddle (is she committing suicide? is she being sucked into the earth? is she turning into a swamp? I have no idea! And I’ve seen it twice).

More problematic is “Witches Lament” which contains the line ‘Children won’t listen!’ a self-delusional moment that’s in direct opposition to the show’s actual message and closing number “Children Will Listen.” When that finale is glossed over in chorus and end credits form, it confuses the musical’s takeaway message. This all suggests that the filmmakers were too close to the material and assumed everyone would ‘get it’ while removing the parts that are there to be, uh, gotten. [/SPOILERS]

“I Know Things Now”
Broadway’s recent Annie Lilla Crawford takes on Little Red and does solid work with the role, most amusingly in the opening prologue when her sweet tooth gets the best of her and she sings with her face stuffed. (As if Sondheim’s lyrics aren’t already a mouthful!) The filmmakers choose to stylize her big number (very wise) rather than literalizing it. That the number falls a little flat is possibly the lingering bad taste of The Wolf?

“It Takes Two”
James Corden and Emily Blunt have fine chemistry as the childless couple, The Baker and his wife, that are at the emotional center of the action. That this production cast only actors that can genuinely sing (with the lone wolf —haha- exception of Johnny Depp) is a huge blessing and possibly a note of glorious optimism for the future. Especially considering that the auto-tuned Annie is playing in some of the same theaters as a direct comparison point. 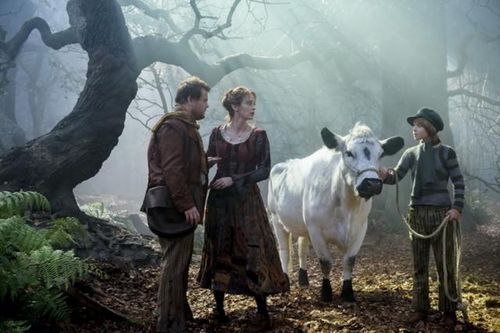 “Your Fault Then”
The show’s super-fast mass blaming ritual retains its heated a-ha! revelations and sad/funny barbed power with these stellar singing actors. But the movie’s strange visual decisions – muddy color and cinematography which my friend has dubbed “baby poop palette” is especially problematic in the act two numbers when the film is not just emotionally but visually darker.

“Giants in the Sky”
Gavroche from Les Miz plays Jack and belts this song with the kind of Broadway Baby gusto that you rarely see in movie musicals while he jumps around a giant tree. The only drawback here is the director’s literalism. Why waste that tight “musicals are risky!” budget on bad beanstalk and Giant effects when you could opt for a stylized flashback like the kind Little Red got?

“No One is Alone”
While it’s not the last ballad in the musical it becomes the defacto finale in this adaptation. What a powerhouse number it remains with clear eyed grieving beauty and generous subtext for the queer audience about creating your own families. The clipping of its final note is a marvel of precision in the sound editing and narrative thrust.

“Any Moment/Moments in the Woods”
Chris Pine as Cinderella’s Prince is the movie’s biggest surprise (“I was raised to be charming, not sincere.”) He’s pitch-perfect as this two-dimensional character that wants to rub up all over the three-dimensional ladies. Emily Blunt, who has great musical chops (hurrah) with a wonderful fluidity between comic flourishes and emotional truth, nails her big monologue solo “Moments in the Woods” as she tries to regain her bearings from the Prince’s seduction. Unfortunately the film chickens out of the follow-through making the outer edge of this final scene blink and you’ll miss it confusing when it needs to be blunt and can’t miss it jaw-dropping. 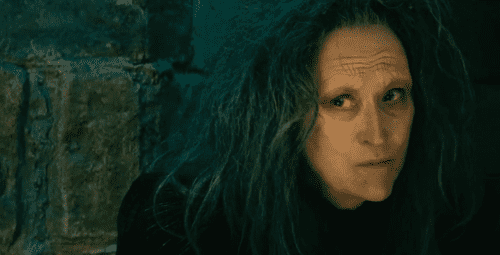 “Stay With Me”
Streep’s finest moment in an otherwise manic performance is this slow build character song. She sings it in the cramped confines of Rapunzel’s tower (perhaps the tighter quarters reigned her in?) and she sings it perfectly, mixing a hypnotic brew of bossiness, neediness, loneliness, and pleading, with fire and nuance. The song remains a clever portrait of over-protective parenting. 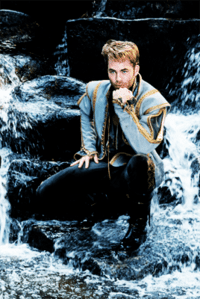 “Prologue (Into the Woods)”
The 17 minute opening segment is just about as wonderful as movie kick-offs get, whirling all the characters into instant action with character bits that braid together until you’re looking at the whole blissful company embarking on a musical journey together. If you love the traditional movie musical, the effect is not unlike dying and waking up in show tune heaven.

“Agony”
Chris Pine and Billy Magnussen and Billy Magnussen’s ass (the unheralded star of this production in black leather pants continually mounting and dismounting horses) elevate this silly number from the stage show into the comic highlight of the movie. The duet finds the Prince Charmings attempting to one-up each other in their tales of romantic longing for their would be brides. We knew Billy Magnussen had this in him (thanks to his Tony nominated stage work) but who knew that the heretofore bland Chris Pine was this good at comedy?

“On the Steps of the Palace”
Cinderella’s big solo, as she flees the ball and her Prince Charming only to find herself outwitted and stuck on the steps of his palace has been brilliantly rethought as an in-the-moment soliloquy. Time freezes gorgeously, Chris Pine stands erect and out of focus in the background and Anna Kendrick, a thoroughly modern Cinderella with a voice from the gods, sings her indecisive little heart out. It’s the kind of number that can restore your faith in this continually uneven treacherous genre. On the Steps of the Palace should be played on loop to shame non-singing stars from signing on to singing roles whenever they’re considering it. May it inspire directors (even hit and miss Rob Marshall who is responsible for this one) to approach every scene with the same amount of care, invention, clear emotional intent, and singing actors who are more than up to the task. 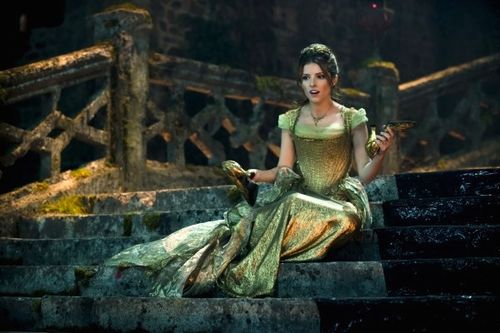 And so we come to the end…of our list.

…that it were easier to enjoy modern movie musicals full stop. I think Cinderella said it best when she said

My father’s house was a nightmare. Yours was a dream. Now I want something inbetween.

Such is the curse of the movie musical fanatic, to forever balance on a knife's edge between devastating disappointment and ecstatic pleasure. Into the Woods provides plenty of both but tilts far enough toward the latter to whet our appetites for another movie musical balancing act.