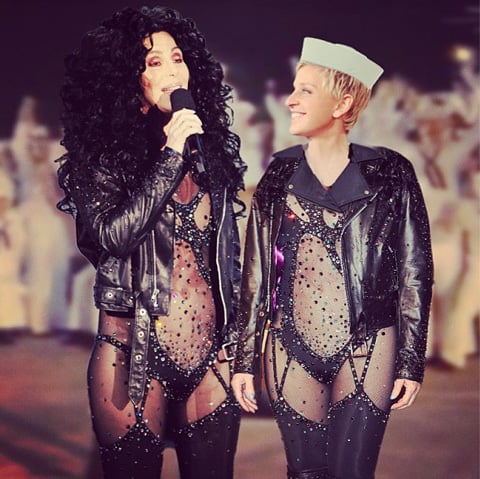 When I started writing Gay Iconography in late 2013, I hoped to explore why some celebrities and artists held mass appeal — not to be confused with universal appeal, mind you — within the gay community. Over time, what began as a light-hearted feature celebrating these stars with a few YouTube clips became a lightning rod of conversation and, shall we say, spirited debate.

This year, the first full calendar year of the column, Gay Iconography has received more than 1,300 comments (and, yes, I read them all). I thought it would be interesting to look back at lessons learned from these conversations and see if we’re any closer to recognizing what draws some of us to these cultural cornerstones.

The conversation may not have always been nuanced (and, of course, it did occasionally devolve into name-calling and flamewars like any comments section on the Internet), but there have been some surprising revelations. For example, while I had expected some controversial choices like Queen Latifah and Donna Summer to be met with criticism, and I could have anticipated younger picks like Robyn or Frank Ocean to be easily dismissed, I was still surprised to see people deny the impact of, say, Cher, Madonna or Dolly Parton. There’s always room to debate the merits of any one individual, but it seemed at times as if some folks aimed to refute the existence of a unique LGBT culture to represent at all.

However, looking back over the comments from this year, some trends do start to emerge as to what some might consider a gay icon. See some of the most prevailing ideas perpetuated in the comments and let us know if you agree, AFTER THE JUMP …

One of the more common (and at times troubling) ideas that pops up in the comments of these posts is the idea that the gay icon mantle should be reserved for gay men. On the Cyndi Lauper post, Roger wrote: “Where are our male icons? Female icons ultimately serve the interests of women more than they do us guys. We need male icons.” It was a sentiment echoed by Rable on a post about Anderson Cooper (“Finally, someone this site decides is a ‘gay icon’ that is actually part of our community. Straight women are not ‘gay icons.’”) and by Tyler on our post about Jonathan Groff (“Wow, an actual gay man suggested as a possible gay icon. Not a heterosexual female. Not a fake trans female. But an actual bona fide gay dude. Progress!”). For reference, in 2014, we featured 27 posts focused on women, 23 on men. In terms of sexuality, 28 have identified as LGBT.

It’s not enough to just be gay, however. There is also an expectation of significant contribution to the gay community. Commenter Tigernan summed it up with their thoughts on Neil Patrick Harris: “If you're going to be a gay icon, I think you need to have done something for us than just exist. So far Neil has come out and…that's it. I'm not slamming him, I'm just saying that we appear to be willing to give accolades to people simply for admitting that they are gay. No thank you – charity work, artistic contribution, or heroism: otherwise you are just a gay person who a lot of people like.” Even vocal LGBT supporter Dolly Parton is held to a higher standard by Petey, whom said “Saying things is not the same as doing things. A true gay icon should have the balls to support full equality for homosexual men by marching alongside them and holding a banner. PR statements aren't enough.” It’s an interesting notion. While younger, contemporary stars like Lady Gaga have championed LGBT rights, is it fair to expect the same from the stars of the ’50s, ‘60s, ‘70s, etc.?

Of course, icons can be a generational thing. Even a standard like Lucille Ball didn’t feel relevant to commenter Mr. Mooney, whom said “As a young gay man, Lucille Ball is void of significance to my reality or my identity in 2014.” However, picks like Robyn, Beth Ditto and Frank Ocean were met with skepticism. David From Canada set a decade minimum on a career before a performer is considered an icon. Writing on the Frank Ocean post he said: “What?! Frank Ocean hasn't been around long enough to be an icon to anybody, including the gay community. Give him at least another 10 years.”

Although I’m personally inclined to ignore it, I feel I would be remiss to not mention the perpetual references to “effeminate” gay men in the comments of many of these posts. Though sometimes under the guise of the false idea that only women have been featured in the series, many of these posts have surfaced the underlying hostility toward gay men who don’t conform to traditional expressions of masculinity. Try this gem, from the post about Chris Colfer: “Most more masculine gay men simply do not want to associate themselves with what ‘gay’ has become—among activists and in the media—defined, as it is now, by the culture of effeminacy and ‘gender-non-conformity’ and the anti-masculinity mindset they represent, which is anathema to the masculine values that almost all male competitive athletes, regardless of sexual orientation, hold dear.”

Even though no choice will ever be met with unanimous acclaim, there are always reminders why each of these icons matter. Like when commenter SPACECADET shared his thought on Pedro Zamora, “I was 15 when this season aired and not really aware of what my true sexuality was at that point, but I still picked up on the normalcy about being gay when I was watching Pedro on The Real World. He definitely was a role model and made an impact on many people's lives.” Or how John described what Ellen meant to him: “If it weren't for Ellen (and Rosie and Will & Grace), I don't think I could have come out to my 5 kids at 40 years old and left my wife and become the authentic, genuine man that God intended me to be. My childhood was one of repression and anger, and I'm so glad that I've lived to see the day when Elton John & Ellen can just chat about kids in a same-sex marriage like it was just the same-old, same-old.” My favorite though was this story from commenter WRR about John Barrowman. “The father of one of my students stopped to talk with me after school one day. His son had heard from another student that I was gay and didn't know what to make of it. The father said, ‘Oh, well he's like Captain Jack, that's all.; And that's all this boy needed to hear.”

Whom do you consider an icon?