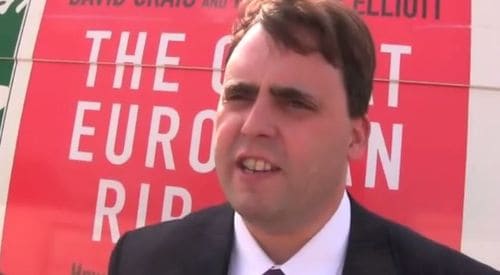 Kerry Smith, a now former parliamentary candidate for the United Kingdom’s Independence Party was met with abrupt pushback earlier this month after being recorded referring to Chinese minorities as “chinky” and gay people as “disgusting old poofters.” According to UKIP’s economics spokesman Patrick O’Flynn, Kerry attributed his racist and homophobic outburst to the prescription painkillers he’d been using at the time. Smith withdrew his parliamentary bid after recordings of his racist and homophobic remarks were made public.

“I want the best for South Basildon and East Thurrock and I want to see the real issues discussed that touch the lives of people,” Smith said in a public statement. “Therefore I have chosen to resign so that UKIP can win this seat next May.”

“What I am pleased about is that he has resigned and stood down, whether he was on sedatives or not,” said UKIP deputy chair Suzanne Evans. “I think the party wholeheartedly accepts that is wasn’t a good enough excuse and we are all delighted that he has done the decent thing and fallen on his sword.”

In 2012 Smith came under fire for a phone call in which he was overheard making jokes about “shooting peasants” and calling UKIP’s immigration spokesman Steven Wolfe a “fucking carpetbagger.”

“The fact that we have someone who has made racist and homophobic language has gone within 24 hours shows the strength of the team behind us who are making sure that we have no one in this party who has such views representing our party and the people that vote for us,” Wolfe said.

Listen to Smith's damning phone call, AFTER THE JUMP…

Previous Post: « Spanish Television Host Sandra Barneda Comes Out On Air: VIDEO
Next Post: Robbie Rogers Spills the Beans on His ‘Awkward’ First Time Hooking Up With Another Guy: VIDEO »