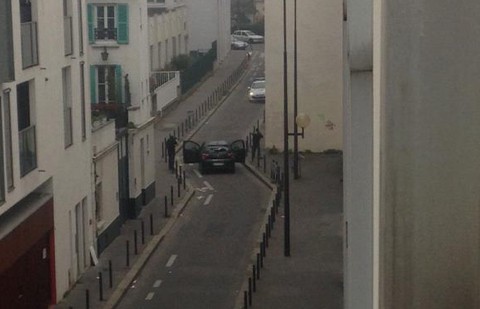 Twelve people (10 journalists and two police officers) have been confirmed dead and five injured after three gunmen opened fire this morning on the offices of the satirical newspaper Charlie Hebdo in Paris this morning. The attackers fled in a vehicle they carjacked and are still at large.

A police spokesman told reporters the dead included ten journalists and two police officers, adding that five people were seriously injured. Earlier, Luc Poignard, a police union official, said two attackers escaped in two vehicles after opening fire at Charlie Hebdo. Witnesses said the gunmen headed to one of the exits of the city center, with the police in pursuit.

Rocco Contento, a spokesman for the Unité police union, told reporters that three attackers got into a getaway car driven by a fourth man on fleeing the building and drove to Port de Pantin in north-east Paris, where they abandoned the first car and hijacked a second – turning the driver out into the road.

The magazine was hit with a petrol bomb attack in 2011 after announcing that the Prophet Muhammed would be 'editor-in-chief' of its next issue. According to The Guardian, the paper's most recent tweet and its current cover concerned Islamism.

The paper's current editor-in-chief was in London today at the time of the attacks, according to the Press Association.

Videos and tweets (some graphic) showing the attackers began appearing online shortly after the attacks.

A tweet from a French journalist allegedly showed the gunmen outside the offices:

Four among those killed have been named by media sources, but not confirmed officially, according to the Guardian –

They are the magazine’s editor and cartoonist, Stéphane Charbonnier, known as Charb; and three other cartoonists: Cabu, Georges Wolinski and Bernard Verlhac, known as Tignous. The Guardian is awaiting official confirmation of these names.

As did President Obama and German Chancellor Angela Merkel.

I strongly condemn the horrific shooting at the offices of Charlie Hebdo magazine in Paris that has reportedly killed 12 people. Our thoughts and prayers are with the victims of this terrorist attack and the people of France at this difficult time. France is America's oldest ally, and has stood shoulder to shoulder with the United States in the fight against terrorists who threaten our shared security and the world. Time and again, the French people have stood up for the universal values that generations of our people have defended. France, and the great city of Paris where this outrageous attack took place, offer the world a timeless example that will endure well beyond the hateful vision of these killers. We are in touch with French officials and I have directed my Administration to provide any assistance needed to help bring these terrorists to justice.

This abominable act is not only an attack on the lives of French citizens and their security. It is also an attack on freedom of speech and the press, core elements of our free democratic culture. In no way can this be justified.

The hashtag #JeSuisCharlie is being used online to show solidarity with the victims of the attack, according to The Guardian, and is currently trending worldwide…

The Guardian has a liveblog of events surrounding the attacks.

Previous Post: « WATCH: New GIFs And Video Get Up Close And Personal With Justin Bieber And His Calvins
Next Post: FIRST LOOK: Paul Rudd is the ‘Ant-Man’ »