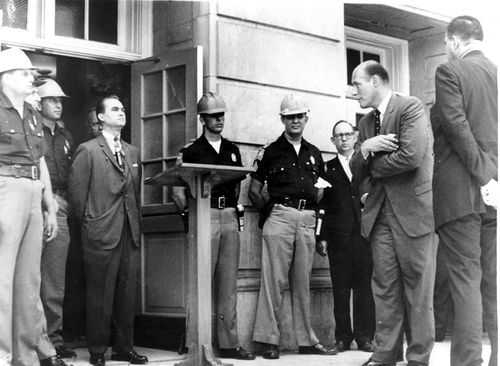 The plaintiffs in the Alabama case that overturned the state's ban on same-sex marriage Friday have asked District Judge Callie Granade to deny the state's request for an emergency stay of her ruling. The plaintiffs have also requested clarification on the ruling's scope following the Alabama Probate Judges Association's assertion that the ruling does open the door to statewide marriage equality.

From the plaintiffs' response:

Clarification is necessary as the Probate Judges association in Alabama have assumed the position like George Wallace at the schoolhouse door staring defiantly upon this Court’s order reasoning that not all citizens of Alabama are entitled to the same rights and privileges afforded under the Constitution of the United States and that as Probate Judges “it is [their] duty to issue marriage licenses in accordance with Alabama law and that means [they] can not legally issue marriage licenses to same sex couples.” Alabama Probate Judges Association statement to the press on January 24, 2015. It is respectfully submitted that this Court’s order declaring Ala. Const. Art. 1§ 36.03 (2006) and Ala. Code 1974 §30-1-19 unconstitutional for violation of the Due Process Clause and the Equal Protection Clause of the Fourteenth Amendment shall meet with immediate defiance and confusion without further clarification.

Stay tuned to see how this showdown in Alabama plays out…

@ItsJustMeMia Unless the federal judge issues a stay then MGM Probate Court will issue a license to ANY couple that wants to be married.

Read the full response below via Equality Case Files: