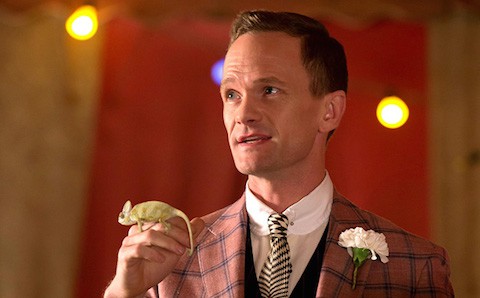 Welcome back! After a brief winter hiatus, American Horror Story: Freak Show returned with a real doozy of a guest star.

We last left a few of our favorite characters in some pretty precarious positions. Whether they were in jail or learning of the treachery that claimed the life of a beloved performer, big things are on the horizon.

Find out how our special guest fit into the twisted world of Freak Show and which character didn't live to see next week, AFTER THE JUMP … 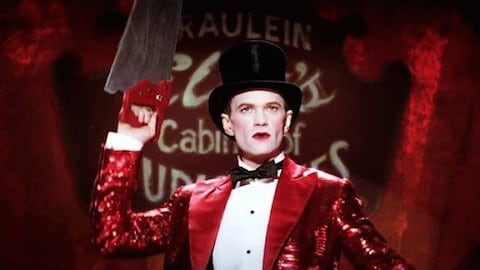 Well, look what the cat dragged in! It’s Barney Stinson himself. Hedwig. Doogie Howser, M.D. It’s host of the 87th Academy Awards, Neil Patrick Harris! What brings him to this neck of the woods? Perhaps he’s here to sing a song and rack up another Emmy Award for a guest spot on a Ryan Murphy show. Or maybe he’s here to ride a magic unicorn to White Castle. No, he’s just here as a poor, Atlanta chameleon breeder, selling his reptiles while nurturing his dreams of fame and fortune. How will his character, Chester, hit it big? Why magic tricks, of course! (Who wants to bet he breaks into a cover of Heart’s “Magic Man” at some point next week?)

He’s immediately taken with the twins, who remind him of some women from his past (more on that in a bit). He makes some goo-goo eyes at Bette and Dot (played by Sarah Paulson and Sarah Paulson wearing a different headband) and it’s all they can do from drowning in their own panties. And yet, these girls are so thiiiiiiiiiirsty. These days, they’re closer to one another than ever. They don’t even need to diary anymore, because they have no secrets. United, they’ve got only one thing on the brain: s-e-x. They’ve had their sights set on all the menfolk on the grounds, trying to find a suitable paramour with whom they could double punch their double V-card. While none of the performers met the standard, this handsome traveling salesman is certainly a promising possibility.

Chester shows Elsa (Jessica Lange) a few of his tricks illusions, but she is not impressed. But wait! There’s more! Have you met Marjorie? She happens to be something even creepier than a clown — a puppet! But not just any puppet, a scary, maybe alive puppet! (More on THAT later, as well.) You may recognize her voice as the divine AHS repertory player Jamie Brewer. And yet, Elsa is unmoved. As a last ditch effort, Chester tries to offer Elsa 50 percent of his chameleon sales, if he can perform. He shows her his ledger. Now she’s impressed. No, not with the hot chameleon trade, but with Chester’s bookkeeping. How’s about Chester can warm up the crowd if he’ll help Elsa with the books. Upon hearing the news, Chester is thrilled! Maybe a little too thrilled? Eerily thrilled. 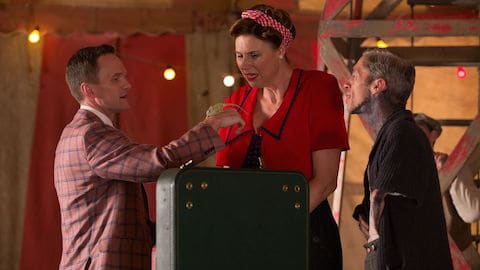 Back in his trailer, Chester gets in a heated conversation with Marjorie. Just in case it wasn’t clear that this isn’t just your average puppet (you know, if the entirely different voice didn’t tip you off), people keep busting in on Chester and saying things like “I thought I heard you talking to someone!” “I can’t believe you can throw your voice like that!” and the whole thing makes me mad that these characters somehow know the songs of Fiona Apple and Nirvana, but they’ve apparently never seen The Twilight Zone. What a waste of anachronisms! What's the deal here? If the puppet is a hallucination, what are the other people hearing? If she isn't, doesn't Chester not realize he's talking when she is? I digress. The twins come in to congratulate Chester on his new gig, and he’s got some news for them. He wants them to be his new lovely assistant(s). He got access to Elsa’s old prop tent and found himself a real nice box for the ol’ saw the lady in half trick. 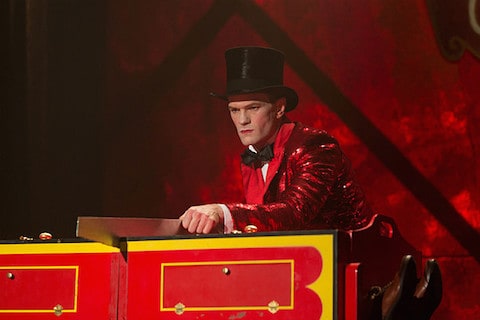 Then we get our first taste of Chester’s past. We see him as a man in uniform (he was at Normandy), sitting with Marjorie on his lap, watching two women just go to town on each other. One appears more into him than the other, but he doesn’t join in. Instead, he heads to the garage to work on his puppet act after the other lady gives him some sass. Weird.

That’s not the case in the present time, where Bette and Dot are practically throwing themselves at him. Their indecent proposal sends him into a bit of a tizzy. Maybe it’s the metal plate in his head, or maybe it’s the memory of those two brunette women going at it without him, but whatever it is, it’s got him very, very upset. They assure him that they are both very onboard with this plan, and they both want him to be very involved. While that’s some comfort, he reaches for Marjorie, assuring the twins that she helps keep him calm. The twins reply “Whatever it takes!” (which is probably what I also would say to sleep with NPH, but nevermind that). Success all around.

Everything's coming up Chester! In addition to successfully deflowering the Tattler sisters, Elsa’s offering to sell him the show, thanks to her convenient good deal sense. It’s way better luck for him than back in the day when one of those sapphic brunettes hid Marjorie and mocked Chester for his work with the puppet and the fact he was still wearing his uniform four years after the war ended. (It’s also in this scene where we see Chester seeing Marjorie as a full-sized human, whatever that means.) If only she could see him now! As Elsa reviews the contract with him, he talks about how he’s going to give her tent to Marjorie and make her the headliner, because the poor girl’s been through so much lately. Elsa gets that look on her face, like “DO GO ON. THIS DOESN’T SOUND CRAZY AT ALL. AT ALL.” 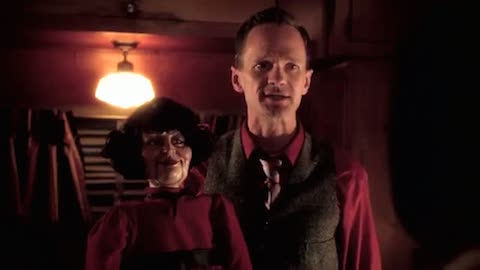 Later, when Marjorie goes missing, Chester loses it. He searches high and low, only to find Dandy (Finn Wittrock) instead. Unbeknownst to Chester, Dandy’s got a private detective keeping an eye on the twins, so he knows that Chester and the girls have gotten very familiar with each other, in the Biblical sense and all. He also knows about Chester’s past. Like how his wife fell in love with an army widow while he was deployed, and how, when he got home, he was edged out of the relationship. Most importantly, he knows that his wife and her gal pal were found very murder-smashed and that Chester swears the puppet did it. Don’t worry, Chester, Dandy promises he knows where Marjorie is hiding and he’s here to help.

Chester finds Marjorie in the big tent. She tells him that she wants to be a headliner, and also she wants him to get rid of those that are coming between them. Watch out, Tattlers. 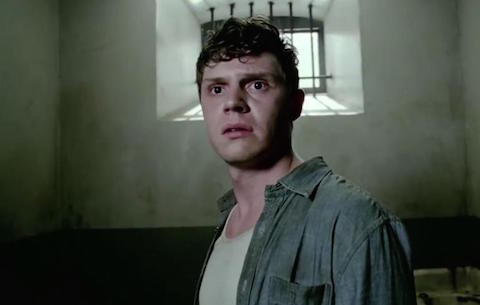 Meanwhile, Jimmy Darling (Evan Peters) is still in the slammer. Stanley (Denis O’Hare) is trying to convince him to take him up on his offer to get Jimmy a lawyer if Jimmy gives him one of his hands. The mere mention of Meep (Benjamin Woolf) is enough to convince Jimmy to reconsider. Stan slips him a vial of something that makes him sick, which is enough of a diversion to get the guards to call an ambulance (that happens to be driven by Stanley’s boytoy disguised as an EMT). By the time Jimmy wakes up at the county hospital, he’s not just missing the one hand promised to Stanley, he’s missing both.

Dell (Michael Chiklis) comes to visit and is distraught by Jimmy’s condition. He knows that Stanley’s a liar and a crook and that Jimmy lost his hands for nothing. Then he launches into some heavy-lobsterhanded story about how he was the only one in his family born without the signature Toledo lobster claws, so his dad would berate him mercilessly. As if that didn’t hammer it home enough, Jimmy says to him “Imagine that, being a freak for being normal.” WE GET IT. Just to put one more hammy point on the scene, as Dell helps shovel food into Jimmy’s mouth, he says he’s 50 years old and it’s his first time feeding his son. They also talk about buying the show from Elsa, unaware of her dealings with Chester. This will turn out well.

Dell returns to the grounds and tells Elsa about Jimmy’s plight. She’s concerned, but not enough to do much to help. She just tells him to get Jimmy out of there. He teams up with Eve (Erika Ervin) to rescue Jimmy as the police transfer him from the hospital back to prison. Dell kills the police escorts. More cops come looking for Jimmy back at Elsa’s, but the real trouble awaiting Dell is Desiree.

Fresh from her trip to the museum of morbidity, she’s waiting in his trailer with a gun. She asks him to tell her whom he has killed. He fesses up to the cops, and says they had it coming, but she knows there’s more than that. Elsewhere, Maggie (Emma Roberts) is showing Elsa the body of Ma Petite (Jyoti Amge). As Dell confesses to smothering Ma Petite to Desiree, Elsa shows up out of nowhere and shoots him in the head from behind. R.I.P., Dell. You were a very, very messy character whose motivations weren’t always clear, and, honestly, I’m still not sure how I feel about you.

Where do you think Jimmy is hiding? And what’s the deal with Marjorie? She certainly seems like a figment of Chester’s psychosis, but don’t put it past this show to make her a ghost or some never-explained alien.