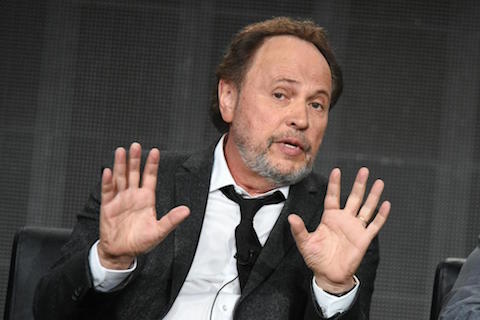 As we are all fully aware at this point, legendary comedian Billy Crystal wedged his foot down his esophagus during his Television Critics Association press circuit, saying that gay characters on television are "a bit too much," "Sometimes, it’s just pushing it a little too far for my taste," and of course the old saw of 'shoving it in his face.'

The Hollywood Reporter figured that the remarks had to be taken out of context, particularly given that Crystal had played one of the first openly gay characters on primetime television, and investigated further. Crystal clarified, saying:

What I meant was that whenever sex or graphic nudity of any kind (gay or straight) is gratuitous to the plot or story it becomes a little too much for my taste.

Huffington Post editor Noah Michelson had similar concerns and also went looking for further context, though whereas the The Hollywood Reporter was willing to take Crystal's statement to them at face value, the interview Michelson found at Xfinity's tv blog was more damning. There, Crystal said:

But when I feel it's a cause, when I feel it's "You're going to like my lifestyle," no matter what it is, I'm going to have a problem and there were a couple of shows I went 'I couldn't watch that with somebody else.'

We live in a very scary time in many ways. You can't say this, you can't say that, you can't offend this group, that group. People come up to you and ask if you were offended. I don't understand that. I understand it why everyone is watching out for the other person. That's offensive to me.

Which brought Michelson to his conclusion:

Beneath all of the progress we've made, the shit — from disgust with our sex lives to frustration with our wanting to push our "cause" and "lifestyle" — still exists. We can pass all of the laws we want and we can give queer people all the same rights as non-queers, but if the fundamental feeling about us is still "Ew! Yuck! I don't want to see that!" or "Stop shoving that in our faces!" I hardly call that progress.