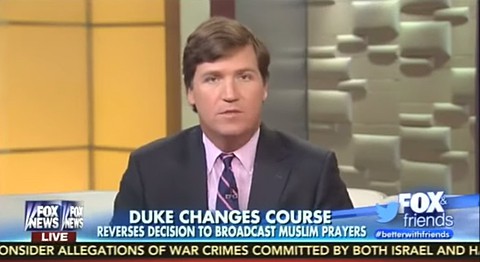 Last week, Duke University reversed a plan to allow Muslim students to hold a weekly call-to-prayer from the school's chapel bell tower and relocated it instead to the chapel's quadrangle after what it said were potential safety threats. Duke had offered the bell tower to the students in order to send a message of inclusivity.

On FOX & Friends Saturday, Tucker Carlson chimed in about the controversy, taking a whack at Duke for its policies:

"There's nothing inclusive about Duke. Notice they're not giving equal time to, say, evangelical pro-life messages. They're not broadcasting those from the loudspeakers on the chapel. If you got in the middle of the Duke quad and read sections of the Bible that criticized homosexuality, you'd be dragged away by school security…They're not inclusive, they're making a political statement about how they're on the side of Muslims!"