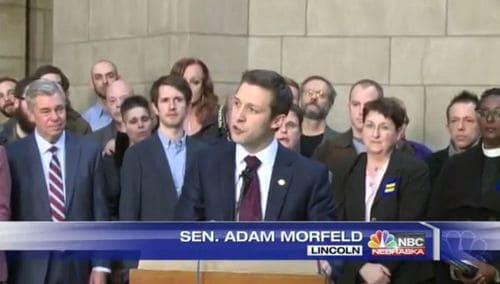 Nebraskan senators have introduced bills regarding equal employment, second parent adoption, foster parent legislation, and discrimination protections for LGBT individuals, furthering their rights within the state. On Wednesday, a large crowd gathered at the state capitol to show their support for these advancements, with State Senators Adam Morfeld, Sara Howard, and Jeremy Nordquist speaking, all of whom have introduced pro-LGBT bills for the state.

We will no longer wait as rights that are supposedly guaranteed to all, but then denied in our workplace and our courts for some. If people don't think that it doesn't happen, they're wrong.

Watch a NBC Nebraska report on the press conference, AFTER THE JUMP…