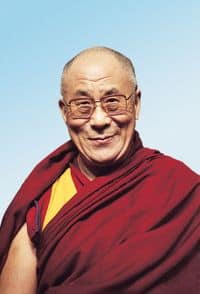 The Dalai Lama is scheduled to attend this year's National Prayer Breakfast on February 5 alongside President Obama – an event hosted by The Fellowship Foundation, a conservative Christian organization more widely known as "The Family." TIME reports this is the first time the two will make a joint public appearance.

In the past, LGBT activist group GetEQUAL has protested outside the event. No word yet on if they plan on protesting this year.

The Dalai Lama, considered in Tibetan Buddhism to be the 14th incarnation of Avalokiteśvara, a being who embodies the compassion of all Buddhas, said last year he was okay with the idea of gay marriage.

Previous Post: « A Fascinating (and Chaotic) Look At a World Without Humans – VIDEO
Next Post: Israeli Travel Group Offers First Ever Gay Tour of Auschwitz: VIDEO »