A federal judge in Georgia has denied the state's motion to dismiss a Lambda Legal lawsuit challening the state's ban on same-sex marriage, The Los Angeles Times reports: 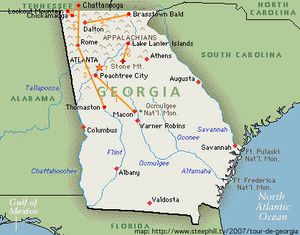 U.S. District Judge William S. Duffey Jr. said in an opinion issued late Thursday that the couples do not have a fundamental right to marry a person of the same sex, but he disagreed that Georgia’s “interests in child welfare and procreation are advanced by the state’s prohibition on same-sex marriages.” […]

Duffey considered other types of marriages, previously forbidden, that were found to violate constitutional rights. Virginia’s anti-miscegenation law, prohibiting the marriage of whites to nonwhites, was struck down in 1967 by the U.S. Supreme Court, which found that “marriage is one of the ‘basic civil rights of man,’ fundamental to our very existence and survival.”

The same concept led to the invalidation of a Wisconsin statute, which required people to prove that they had complied with child support obligations and that the children were unlikely to become “public charges.” Similar reasoning also tossed a Missouri statute forbidding inmates from marrying.

But in those cases, Duffey ruled, the right to marry, period, was being challenged. In this case, he wrote, the plaintiffs are permitted to marry; they are only forbidden from marrying a person of the same sex. That, Duffey says, is not a violation of their rights.

Duffey's ruling means the Georgia case can proceed to trial, although the state can still appeal Duffey's decision.

“This shows the state’s position is doomed,” out constitutional scholar Anthony Kreis told the GA Voice. “It’s not a perfect victory but it’s what we needed.”

The lawsuit was filed by LGBT legal group Lambda Legal on behalf of four same-sex couples and a widow.

“The ruling gives our plaintiffs and all same-sex couples the opportunity to be heard in court and ensures Georgia is on the right path of history sooner rather than later,” she added.