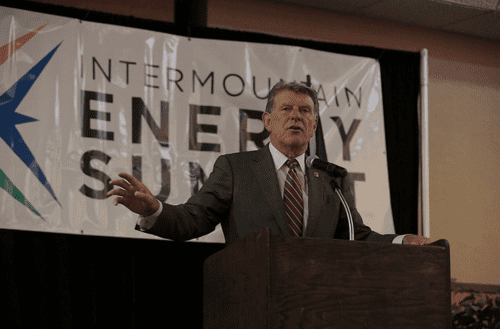 Idaho Governor Butch Otter and Attorney General Lawrence Wasden have both submitted petitions to the U.S. Supreme Court in hopes of challenging same-sex marriage’s legality in the state. Though the petitions were filed separately, both argue that gay marriage in Idaho could have far reaching consequences that affect other states.

In the past Governor Otter has made clear his intentions to continuously fight against Idaho’s steady progress towards equality, even if it means wasting hundreds of thousands of taxpayer dollars. Otter’s petition, which was filed earlier this week, argues that Idaho’s situation is unique from those of other states because of the couples responsible for initially challenging the state’s ban on gay marriage.

Two of the four lesbians involved in the challenge, Otter points out, were married out of state and seeking to have their marriage recognized. Otter’s petition also falls back on the widely discredited idea that children thrive better under the care of opposite-sex parents.

"It is important that at least one of the cases this court considers on the merits be a case in which the traditional definition of marriage has been defended with the most robust defense available," wrote Gene Schaerr, one of Utah’s lead legal advisors in its fight against gay marriage. "This is that case."

Attorney General Lawrence Wasden’s petition fell back upon the idea that the reversal of Idaho’s ban was a governmental incursion against state’s rights.

"This case presents the Court with the opportunity to resolve a divisive split on a question of nationwide importance,” he explained in the petition. “Whether the United States Constitution now prohibits states from maintaining the traditional definition of civil marriage, i.e., between one man and one woman.”