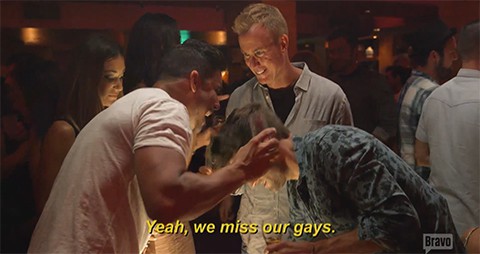 Vanderpump Rules, Bravo's reality show that follows the lives of the employees of Lisa Vanderpump's West Hollywood restaurant Sur, got a little gayer with the revelation that beefcake bartender Jax Taylor used to live with a gay modeling scout, John (who first discovered him), and also modeled nude. Vanderpump previously hinted that she believed Jax has probably slept with a man.

After John reunites with Jax, things take a turn for the awkward and vaguely homoerotic when John pulls Jax in close to tell him, "I want you to realize I love you because I'm over you and still love you as much as I did in the first place." Jax cryptically responds, "But I'm a bigger person now. Because I was so young and just thrown into it right off the bat."

What exactly was Jax thrown into? Jax's confessional doesn't clear up much: "When I started modeling it was looked at as a homosexual thing," Jax says. "It was for gay guys. I'm coming from middle America where there's no gay men." Cut to Jax saying, devoid of proper context, "That was my first time ever. I didn't know what anything like that was, you know."

Watch the vague and potentially gay-baiting video, AFTER THE JUMP… 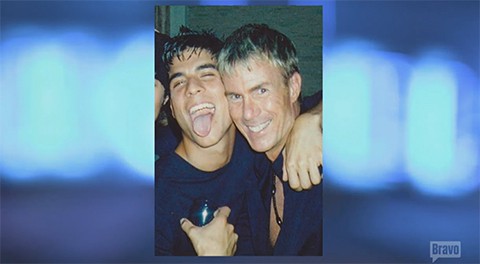 Previous Post: « Matt Bomer to Play Montgomery Clift in HBO Biopic
Next Post: On Gay Rights, Vietnam is Now More Progressive Than Much of the U.S. »