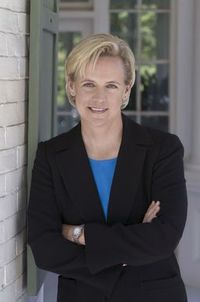 Somewhere in Mary Cheney’s home sits a vintage action figure of the one-time Supreme Commander of the Imperial Fleet. Specifically–the toy lives in her seven year-old son’s room as a tongue-in-cheek reminder of Cheney’s self-proclaimed identity as “Darth Vader’s daughter.”

Cheney joked about her father, former Vice President Dick Cheney, earlier this week during an intimate gathering of college Republicans at the American University in Washington, D.C. Despite Cheney’s longstanding alignment with the Republican Party, she continues to openly push for a more socially progressive GOP when it comes to LGBT equality. In her estimation, she explained, much of the Right’s future success will be contingent upon its continued evolution of thought when it comes to gay Americans.

“I think you’re going to see a lot more Republicans taking the Scott Walker, Chris Christie approach of ‘that’s settled, we’re moving on,’” she said. “I don’t picture the whole national Republican Party running to embrace the issue of marriage equality any time in the near future, I certainly don’t expect to see it in the party’s platform next year in Cleveland.”

Cheney admitted that none of the current potential Republican frontrunners for the 2016 presidential election piqued her interest in particular, though she “would love it if Rob Portman decided to run.”

When asked Cheney declined to comment on her very public spat with her older sister Liz’s opposition to gay marriage.

Previous Post: « Mike Huckabee to Fight for ‘Second-Class Christians,’ Against ‘Secular Theocracy’ Should He Run in 2016: VIDEO
Next Post: Obama: ‘I’m Hopeful the Supreme Court Comes to the Right Decision’ on Gay Marriage: VIDEO »