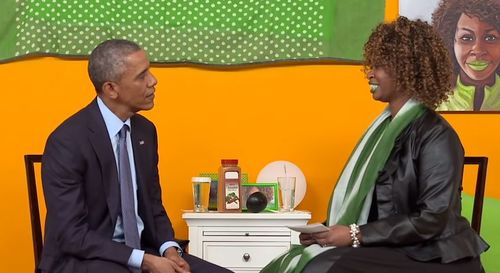 Speaking to internet star GloZell Green at the White House yesterday as part of a series of interviews done by YouTube personalities, President Obama was asked whether he thinks he'll see nationwide marriage equality while still in office.

He replied, in part:

The Supreme Court now is going to be taking on a case, my hope is that they go ahead and recognize what I think the majority of people in America now recognize which is that two people who love each other and are treating each other with respect and aren't bothering anybody else, why would the law treat them differently? There's no good reason for it. So as a consequence, I'm hopeful the Supreme Court comes to the right decision, but I will tell you, peoples' hearts have opened up on this issue. People know that treating folks unfairly, even if you disagree with their lifestyle choice, they're not bothering you. Let them live their lives and under the law they should be treated equally and as far as me personally, just to see all the loving gay and lesbian couples that I know who are great parents and great partners, the idea that we wouldn't treat them like the brothers and sisters that they are, that doesn't make any sense.

Other topics in the GloZell interview included the Sony hack, police profiling, Cuba, and Obama's legacy. GloZell also had a funny flub towards the end accidentally referring to Michelle Obama as the President's "first wife." Obama humorously responded, "Do you know something I don't know?"

You can watch the full interview, as well as the other two by YouTube stars Bethany Mota and Hank Green, AFTER THE JUMP…