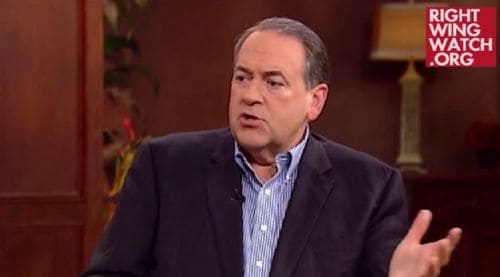 Mike Huckabee is once again airing his groan inducing grievances about the state of freedom of religion in the U.S. in a video segment with Jim Bakker, saying Christians in America are quickly becoming second class citizens. The two also discuss Hobby Lobby’s refusal to cover morning after pills according to the company’s beliefs regarding abortion and how the American Government is overstepping its boundaries in the freedom of religion debate-relating only to Christianity of course.

In another video Huckabee expresses interest in running for President to fight "secular theocracy" and help bring the U.S. back to a "God centered," democracy. Huckabee reiterates the claim that the U.S. was founded on biblical principals and that antagonistic atheistic forces are attempting to take Christianity apart "piece-by-piece."

Both videos are punctuated with conservative verbiage such as "divorcing common sense," "robbing of fundamental rights," and, "religious liberty." If you can handle a double heaping of conservative rhetoric courtesy of Mike Huckabee, you can watch both segments provided by Right Wing Watch, AFTER THE JUMP…