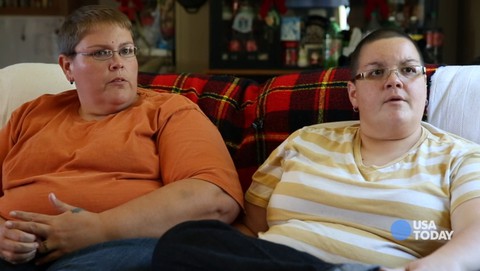 This Friday, January 9, the 5th Circuit court in New Orleans will hear oral arguments in the appeal of the Mississippi ruling that struck down the gay marriage ban in that state on November 25.

The ruling was stayed pending appeal but goes before the federal appellate court this week along with cases from Texas and Louisiana.

USA Today did a lovely interview with plaintiffs Becky Bickett and Andrea Sanders in the couple’s home in Pass Christian, Mississippi. Bickett and Sanders applied for and were denied a marriage license from the state last March.

Bickett and Sanders have it harder because of their economic circumstances. They were literally thrown together after Hurricane Katrina destroyed their parents’ Gulf Coast homes in Bay St. Louis in 2005. Their first home together was a Federal Emergency Management Agency (FEMA) trailer.

Now the couple owns a single-wide trailer on three acres north of the coast, but they are struggling financially. Bickett was laid off from her job as a geospatial analyst and is looking for full-time work. Sanders, with a degree in family relations and human development, is staying home with the toddlers.

They dream of having a big family, but without legalized gay marriage, Sanders isn’t considered to be Owen’s and Adrian’s mom. They cannot adopt or even be foster parents as a couple.

Watch the wonderful interview, AFTER THE JUMP…