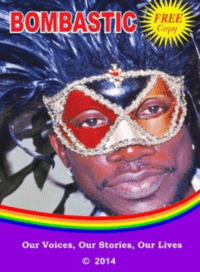 Ugandan gay rights activists are defying the country’s anti-gay laws by publishing a magazine covering “the realities of being gay” in the country.

The Independent reports that LGBT advocates behind Bombastic risk detention by police and death threats by publishing the magazine, which features health advice, twenty personal stories and articles on the clergy and homosexuality.

According to magazine organizer and activist Jacqueline Kasha, the magazine was started to address “the falsehoods spread by the Ugandan media, which regularly publicly humiliates and degrades homosexuals."

"Instead, we are sharing our stories in the hope that we can change social attitudes. The people we are trying to reach out to are the people who are threatening to burn our houses and beat us.

"We are not journalists and I don't respect the media here in Uganda. The media is furious with us because we are reclaiming our stories. We expect them to retaliate. We are always frightened, but nobody else is going to stand up for us; our community needs a face."

In a statement, the activists involved said:

“This magazine will also shade a light to readers on the extent of the marginalization and discrimination the LGBTI community in Uganda continues to face on a daily basis.

We have been forced to live undignified lives; the authors of the stories are Ugandans who, through their voices, should be heard by policy makers and the general public, and hopefully, help to create a path for attitude change in a community that is continuously growing in homophobia and violence against this harmless group of Ugandan citizens.”

They have also called on the government to “promote humanity, peace, unity and liberation as they report on LGBTI issues” and to suspend all moves to introduce further anti-gay legislation; for the public to establish a dialogue with the LGBTI community; and for religious leaders “to refrain from preaching and instigating hate within their congregations.”

Frank Mugisha, a friend and colleague of murdered activist David Kato, added that the magazine is a “vital step for the LGBTI community in Uganda, which has had its stories told negatively by the media. This offers us the chance to give our community its own voice, and hopefully that will help show society there is a more positive picture of the LGBTI community."

Despite last ditch efforts, the Ugandan government failed to push through a revised version of the country’s draconian Anti-Homosexuality Bill last month.