HRC has released its 2014 State Equality Index. Find out where your state landed on the list here.

Glee and Whiplash actress Melissa Benoist has been cast as Supergirl in the upcoming CBS series based on the DC Comics superhero.

The Guardian calls Cucumber the "television event of the week" in its glowing review of the UK gay drama's premiere.

The 2016 Democratic National Convention will take place the week of July 25, right after the RNC. Negotiations are still underway on whether Columbus, Philadelphia, or New York City will host the Democrats.

TLC has already funded their new album via Kickstarter less than 3 days since the campaign began. Katy Perry may have helped a bit too.

King Abdullah of Saudi Arabia has died at the age of 90. Via NYT: "The king’s death adds yet another element of uncertainty in a region already overwhelmed by crises and as Saudi Arabia is itself in a struggle with Iran for regional dominance. The royal family moved quickly to assure a smooth transition of power in a nation that is a close ally of the United States, the world’s largest exporter ofoil and the religious center of the Islamic faith. In a televised statement, a brother of Abdullah, Crown Prince Salman, announced that the king had died and that he had assumed the throne."

Love sci-fi and all things queer? Check out "Queers Destroy Science Fiction!," a special issue of the Hugo-winning magazine LIGHTSPEED written and edited by queer creators that is currently undergoing a Kickstarter campaign.

Duck Dynasty-loving One Direction singer Liam Payne really wants to be a humanitarian (but only when he's drunk).

Google's executive chairman Eric Schmidt predicts the Internet will one day become so synonymous with everything around us that it will "disappear".

Diplo says Taylor Swift fans are the worst people in the world, claims there's "scary stuff" going on in the pop star's life. 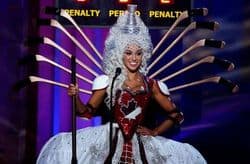 Can you guess which Miss Universe contestant this is?

An half-kilometer asteroid called 2004 BL86 will fly by Earth Monday – zooming past about 745,000 miles away. It will be the closest known asteroid this large to pass near Earth until 2027.