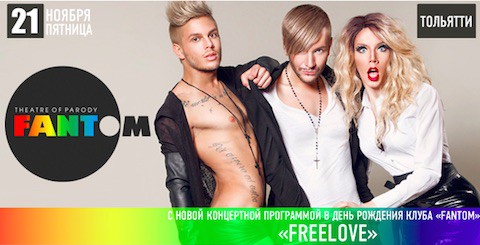 At least four people were injured in an attack last weekend on gay nightclub Fantom in Tolyatti, Russia, reports Buzzfeed.

According to activists, the attack left one person in a critical condition.

Anti-LGBT violence and harassment has increased dramatically in Russia since the country passed an anti-gay "propaganda" law in June 2013, and President Vladimir Putin's government isn't doing anything to stop it, according to a new report from Human Rights Watch.

The club’s management has reportedly tried to downplay the incident as a run-of-the-mill bar fight with no connection to the LGBT community.

However, Gay Liberation Front Konstantin Golava said the attack may have been premeditated and has urged gay people to file police reports when they experience anti-LGBT violence:

“Gay people create a comfortable ghetto for themselves in clubs, one that seems safe to them. There’s nothing wrong with going out and having fun, but it’s also necessary to defend oneself and other LGBTQ people, defend your rights, and not grumble that activists are ‘embracing and provoking’ and that ‘our rights are not being violated.’”

Last month, a gay teacher in St. Petersburg lost her job after being outed to her superiors by homophobic activist Timur Isaev. Kharma beeing a bitch, Isaev has since been charged with a fine of 100,000 rubles (about $1,800) along with a two year stint in jail for embezzling money from a previous employer.

Previous Post: « Anti-Gay Former VA Governor Bob McDonnell Sentenced To Two Years For Corruption
Next Post: For Bush and Other 2016 GOP Hopefuls Dithering On Gay Marriage Could Be Dangerous: VIDEO »