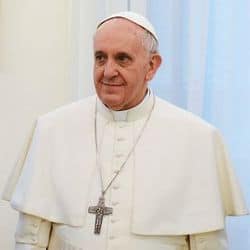 Speaking in Manila, the Philippines, Pope Francis made no qualms about his and the Catholic Church's opposition to same-sex marriage. The remarks were Francis' clearest and least progressive on the subject since he ascended to the Papacy in March 2013. Not only did Francis speak of the need to uphold and protect “traditional marriage”, criticizing attempts to redefine it, he also cautioned against the threat of moral relativism and against “Malthusian” attempts to alter the Church’s position on birth control. Crux Now reports:

“The family is threatened by growing efforts on the part of some to redefine the very institution of marriage, by relativism, by the culture of the ephemeral, by a lack of openness to life,” Francis said.

A Vatican spokesman confirmed Friday evening that, at least in part, the pope had gay marriage in mind.

In November, Francis commented that the heterosexual binary of marriage is “an anthropological fact … that cannot be qualified based on ideological notions or concepts important only at one time in history.”

Francis’ statement in the Philippines follows his remarks less than a week ago in which he criticized “legislation which benefits various forms of cohabitation rather than adequately supporting the family for the welfare of society as a whole.” In Francis’ eyes, this type of legislation marks the family as being “disposable.”

While some, including us here at Towleroad, have speculated as to whether Pope Francis is eyeing a more progressive stance on homosexuality and gay marriage, inspired no doubt by some of the Pope’s more conciliatory remarks towards the LGBT community, the Pope’s most recent statements all seem to be aimed at shutting down any speculation that he, and by extension the Vatican, is considering a dramatic change in dogma when it comes to sexual relations between people of the same gender.

Crux sums it up nicely:

There was a widespread assumption at the time that Francis was backing the progressive side in that argument, leading to speculation in some conservative Catholic circles that the pontiff had stacked the deck to favor certain outcomes.

In light of the pope’s comments in the Philippines, those conclusions may have to be rethought.