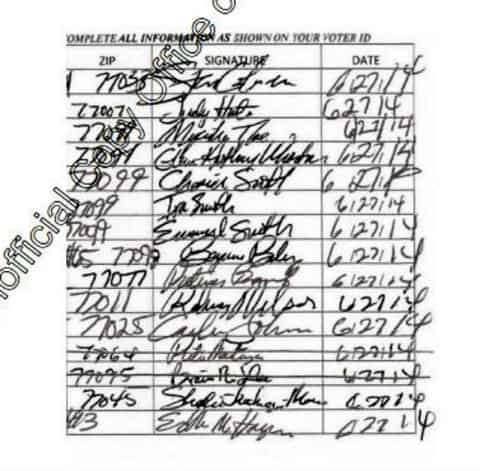 The above image, via The Houston Press, shows numerous signatures that appear to be in the same handwriting on a petition to repeal Houston's Equal Rights Ordinance.

After the Houston City Council passed the LGBT-inclusive nondiscrimination ordinance last summer, opponents launched a petition drive seeking to place a repeal on the ballot. However, the city ultimately rejected the petition, saying it didn't contain enough valid signatures, prompting a lawsuit from the anti-LGBT groups.

The lawsuit is set for trial on Jan. 20. And according to The Houston Press, attorneys for the city allege in court filings that some of the signatures were not only invalid for technical reasons — but also quite possibly forged:

So far, most of the City's challenges to the petitions' validity has centered around technical — and pretty boring — matters like whether a page included a blank space for a circulators' signature. What's really intriguing, though, is the City's more recent contention that many names were forged, and that [plaintiff Jared] Woodfill "is no stranger" to fraudulent petitions.

In motions filed last November, attorneys for the City cited a suit where Woodfill — then the chairman of the Harris County Republican Party — accepted "facially valid" election petitions that "turned out to involve 'forgery, fraud, or other non-accidental defects discoverable only by independent investigation."

No one has argued that Woodfill knew the signatures in that election were invalid at the time he accepted them, but attorneys for the City point out that the court didn't buy Woodfill's argument that "the truthfulness of a circulator's affidavit is strictly a criminal matter."

The November motions include a sampling of the HERO signatures that City attorneys say were "purportedly from many different people, all of whom have the same handwriting." OH SNAP.

HouEquality.com, a website created by supporters of the ordinance, also recently posted evidence, including the above image, of possible fraud related to the repeal petition:

We have included a publicly available document from the Harris County District Clerk's website with regards to the upcoming trial. These are excerpts of a deposition from an individual who gathered signatures for the opposition's petition efforts.

In short, he admits under oath, that he committed fraud and perjured himself by attesting that the signatures he turned in were all collected by him when, in fact, they were not.

The court document makes for an interesting read and certainly is not an isolated case.

As we have seen since the first public discussions about the ordinance, opponents have been willing to use dishonest tactics to achieve their end goal of eliminating the Houston Equal Rights Ordinance.

We will post another interesting court document this week that continues the trend of rooting out the rampant fraud in the petition process.

Make no mistake, the opponents of HERO are not victims, they are calculating fear-mongers with little regard for ethics or the law.

As we mentioned last week, opponents of the ordinance are seeking a jury trial in the case, claiming it's their constitutional right, but the city is asking for a judge to decide the matter. The judge heard arguments on that issue last Friday, The Houston Chronicle reports:

During a brief but lively hearing in the 152nd District Court in Houston, Judge Robert Schaffer said he will likely issue that decision Monday or Tuesday. Barring any delays, the trial is set to start Jan. 20.

Equal rights ordinance opponents are pushing to take the case before a jury instead of allowing Schaffer, as originally planned, to issue a decision from the bench. Attorneys for the city are strongly opposed to that format, saying it violates state election law to send the case to a jury. …

If nothing else, attorneys on both sides came away from Friday's hearing with the distinct impression that regardless of the form the trial takes, it will be a long one. Schaffer said he expected the trial to last between four and six weeks and that it will require the court to scrutinize the disputed petition pages and signatures. The plaintiffs submitted a 5,199-page petition.