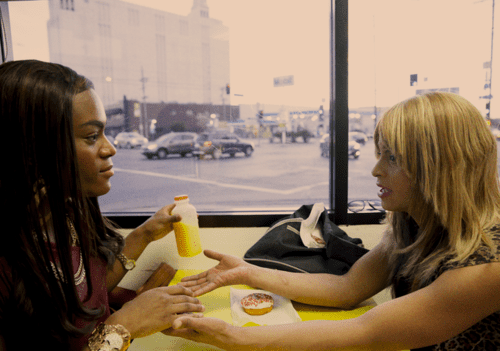 I have something to tell you, bitch: this movie is awesome!

In this case that place is a Hollywood block filled with ex-con trans hookers who still have their penises, their lonely trade, immigrant cab drivers, and the colorful seedy neighborhood they all share. Tangerine is filled with memorable scenes in busted-ass laundromats, car washes, cheap motels with "party rooms", and of course Donut Time. The movie tells the story of a single event-filled day and night (Christmas Eve) in the lives of Sin-Dee Rella (Kiki Kitana Rodriguez) and her best friend Alexandra (Mya Taylor) who treats her to half a holiday sprinkled donut in the movie's abrasively funny opening scene. 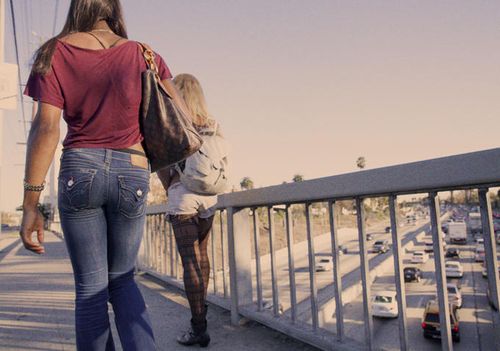 (Remember that claim that Wolf of Wall Street used the most "f–ks" ever uttered in a movie? I hope Tangerine makes that claim for "bitch".)

Alexandra accidentally lets slip that Chester, Sin-Dee's boyfriend/pimp, has been cheating on her with a "white fish with a real pussy!" Sin-Dee's temperature shoots up and she's suddenly on the street, a thumping beat on the soundtrack accompanying her unspoken revenge plans.

Alexandra, who has other things on her mind including a performance at a bar that evening, chases after her begging her for "no more Drama". But we already know, giddily, that Sin-Dee will not comply. And so the comedy is off with a bolt in its high heels, dirty fishnets and bad weaves, to find the pimp or, possibly, the white girl. The film's soundtrack makes hilarious use of music to signify Sin-Dee's passions. At one point she nearly calms down at a bus stop, classical musical blaring as she waits, but a moment later the house music interrupts, roaring back to life, and she snaps back into full woman-scorned revenge mode.

The rest of the film, which was incredibly shot entirely on the iPhone 5s but looks great, is Sin-Dee's hilariously crude comic search for the pimp mixed with Alexandra's evening show and eventually a hot-blooded collision between all the characters and their various story threads. I won't ruin any of the funny surprises. Despite the seediness and in between the huge laughs, the biggest takeaway is the film's sweet and salty tribute to an enduring trans friendship. These women have each other's backs… and weaves when the need arises. Tangerine is the world's all time best indie Christmas trans hooker movie (give or take John Waters' Female Trouble, 1981, if it can be so categorized)

May Tangerine find theatrical distribution as quickly as these ladies make a business transaction. 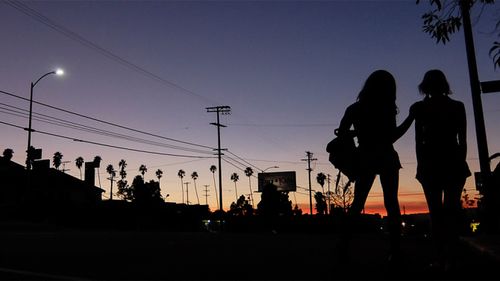