Last week, Republican Larry Hogan was sworn in as the brand new governor of the state of Maryland. One of his first courses of action was to withdraw several regulations, one of which is an anti-discrimination amendment (initiated by his predecessor Martin O'Malley) that would have stopped Medicaid providers from discriminating on the grounds of sexual orientation and gender identity.

Ironically, the new governor's inaugural address included a message about “tolerance and respect.” 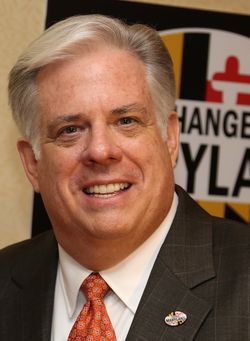 “Equality Maryland is disappointed in the Governor’s actions. To withdraw a regulation that prohibits discrimination in the provision of essential medical services, which also has no fiscal impact, seems contrary to the spirit of inclusiveness touted in his inauguration speech yesterday. We know that trans people in Maryland face discrimination when accessing health care and we should be working to ensure this doesn’t happen instead of overtly condoning it.”

“We just basically pulled all the regulations that were supposed to be published on Friday,” Hogan said Thursday. “We didn’t like the fact that [O’Malley] was trying to push these things through at the last minute. We’re going to make sure our new … team throughout government reviews every one of these regulations to make sure which direction we should head.”

Last year, Hogan revealed that his stance on marriage equality had "evolved." Let's hope he continues to do so in all other areas of equality.

Watch a news segment about his inauguration, which includes an appearance by fellow Republican Chris Christie, AFTER THE JUMP.