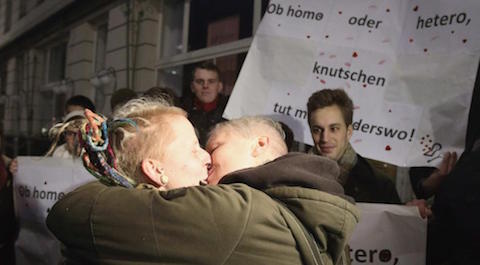 Last week a lesbian couple was kicked out of a cafe in Vienna, Austria for daring to engage in a public kiss that was deemed by management to be appropriate for "a brothel."

Backlash to the homophobia was swift, and as nothing is private anymore, Vienna's tourist agency denouncing the ejection is the least of Cafe Prueckel's worries. The bigger issue is the some 2,000 protesters who marched down the street on Friday, forcing the street to close. Several of the protesters engaged in long, amorous kisses of their own to drive the point home that they will not be discriminated against.

The prudish manager has since apologized for ejecting the couple, an apology that is no doubt utterly sincere contrition for her homophobia and not at all a weak attempt at damage control. Damage control which is not really possible, given the flood of photographs on Twitter, and videos available all over the internet, including a report from DailyMotion that you can watch AFTER THE JUMP…