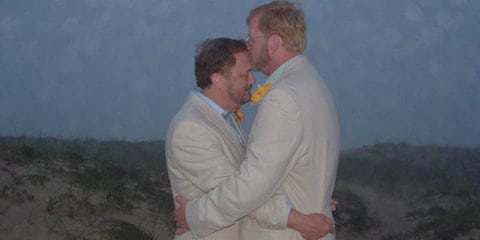 Last September we told you about Alabama man David Fancher, who was killed in an auto accident in 2011 and left his estate to his husband Paul Hard. Fancher's mother, however, stepped in to deny Hard's claim to the estate because she didn't want her son's name used to advance the cause of same-sex marriage and because she's a terrible human being.

Unfortunately for Pat Fancher and the abominable Foundation For Moral Law, and fortunately for the rest of us who have an understanding of basic human decency, according to the Montgomery Advertiser's Brian Lyman the state of Alabama has issued Hard a new death certificate for Fancher, this time listing Fancher as his husband.

Getting David's death certificate was emotional. Just to finally see the wording on there that at the time of his death he was married, and he was married to me, corrects a hurtful wrong.

Here's a photo of the application. So far, it's just the usual form stuff. #alpolitics pic.twitter.com/5q2kdDS6gh