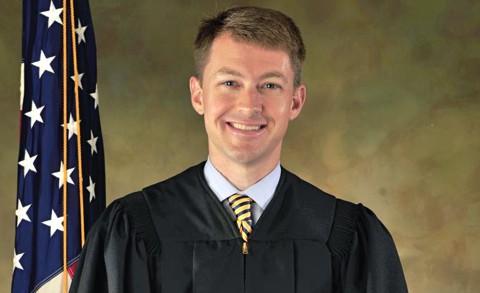 Several probate judges in Alabama say they won't issue marriage licenses to same-sex couples on Monday — when a stay expires on a federal district judge's ruling striking down the state's marriage ban.

The Troy Messenger reports that Pike County Probate Judge Wes Allen (above) plans to stop issuing marriage licenses altogether to avoid providing them to same-sex couples, which he says would violate his religious beliefs:

“The people of Pike County elected me to perform my duties and they also elected me because of who I am and the values I live by,” Allen said. “I am choosing to take the Pike County Probate Office out of the marriage licensing business altogether. That is completely within my rights under the laws of Alabama.”

Allen cited state law, specifically Alabama Code Section 30-1-9, which states “Marriage licenses may be issued by the judges of probate of the several counties.”

Allen said the word “may” in the statue shows that Alabama law does not mandate that he issue marriage licenses.

He also cited Alabama Law Code Section 30-1-7, which he said gives Probate Judges discretion regarding the performance of marriage ceremonies.

“The word ‘may’ implies that I have a choice,” Allen said. “At this time, I am exercising my right to choose not to issue any marriage licenses to anyone.”

Interestingly, Allen is also citing Alabama's "license to discriminate" law — the Alabama Religious Freedom Amendment — which states that, "Governments should not burden religious exercise without compelling justification." Alabama is the only state that has enshrined a Religious Freedom law — known as a RFRA — in its state Constitution. More from Allen:

“I believe that the Alabama Constitution and federal law protect my right to both live my life as a Christian and perform my elected duties,” Allen said. “The way that the law allows me to do that is by giving me the discretion to end the issuance of marriage licenses, and that is the legal course I am taking.”

According to The Troy Messenger, probate judges in Chilton, Elmore and Geneva counties have said they will stop performing marriages but may continue to issue marriage licenses.

The Demopolis Times reports that Marengo County Probate Judge Laurie Hall will still issue marriage licenses but will not sign them:

“I have been advised that licenses must still be made available through the Probate Office; thus, begrudgingly, licenses will remain available through the Probate Office until and unless I am notified and advised otherwise," Hall said. "Marriage licenses are processed through the Vital Statistics division of the Alabama Department of Public Health, which has informed the Probate Judges Association that, despite the absence of the signature of the Probate Judge, licenses will still be accepted and processed. Based on that information, I will not be placing my signature on marriage licenses. I continue to pray for our county, state and country, and the leaders and citizens thereof, and ask for your prayers, as well.”

Despite the resistance from some probate judges, the Alabama Department of Public Health is preparing for the possible arrival of same-sex marriage on Monday — issuing new gender-neutral license forms that replace "bride" and "groom" with "first listed spouse and "second listed spouse."