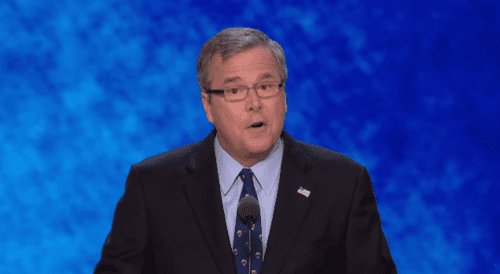 With the race for the White House in 2016 already underway, various exploratory committees are hard at work vying for the biggest slice of the campaign fundraiser pie in this crazy post-Citizens United political landscape we find ourselves in. Heavyweight contender Jeb Bush has been doing quite well in this regard, and is reportedly aiming to raise $100 million before he formally enters the race sometime later this year. Helping the former Florida governor reach this goal are a number of donors with left-leaning sensibilities on social issues, a reality that isn’t sitting well with the party’s “anti” crowd.

Naturally, the influx of these donors has raised questions about were exactly Bush stands on certain divisive social issues. Like President Obama, we’ve seen Bush tweak his public stance on issues like gay marriage in order to make himself a more palatable candidate for the electorate to swallow. Following marriage equality’s arrival in Florida last month, for example, Bush issued a calculated statement saying:

“We live in a democracy, and regardless of our disagreements, we have to respect the rule of law. I hope that we can show respect for the good people on all sides of the gay and lesbian marriage issue – including couples making lifetime commitments to each other who are seeking greater legal protections and those of us who believe marriage is a sacrament and want to safeguard religious liberty.”

And while the statement is far from a ringing endorsement on LGBT equality, it’s still light years ahead of his dismissal of “sodomy” rights back in the 1990s. It’s clear Bush is positioning himself as the moderate of the 2016 GOP pack – a strategy that appears to be working in his favor financially.

Donors, however, seem increasingly convinced that Bush (again like Obama circa 2008) is even more evolved on the issue of LGBT rights privately than he is publicly.

But inside Bush’s orbit, some believe his personal feelings on the subject may have evolved beyond his on-the-record statements. Three Republican supporters who have recently spoken with Bush as he’s blitzed the GOP fundraising circuit told BuzzFeed News they came away with the impression that on the question of marriage equality, he was supportive at best and agnostic at worst.

“He wants to do the respectful, human thing,” said one of the Republicans, a donor who requested anonymity to comment on private conversations.

If Bush does decide to open up more about the marriage issue in the future, it will likely be with the help of his soon-to-be communications director Tim Miller, an openly gay man.