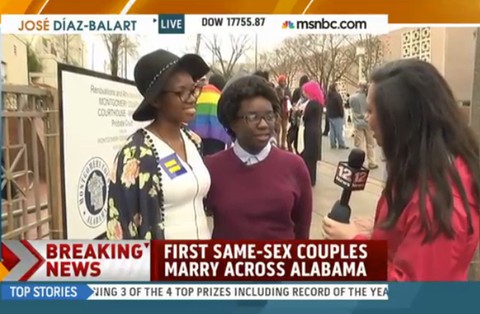 Tori Sisson and Shante Wolf, a gay couple from Tuskegee, Alabama who were the first married in Montgomery, Alabama this morning spoke with WSFA TV's Melissa Johnson about their experience.

"It's humbling. We came out here yesterday to camp out…People came by gave us donuts and chocolates. I got a poem this morning from a lady I didn't even know. So it's been pretty exciting."

While things in Montgomery County are going smoothly, a majority of counties across the state have now either suspended the issuance of all marriage licenses or are only accepting applications.

Probate judges have said it is the best compromise for the moment, until they determine which order to follow.